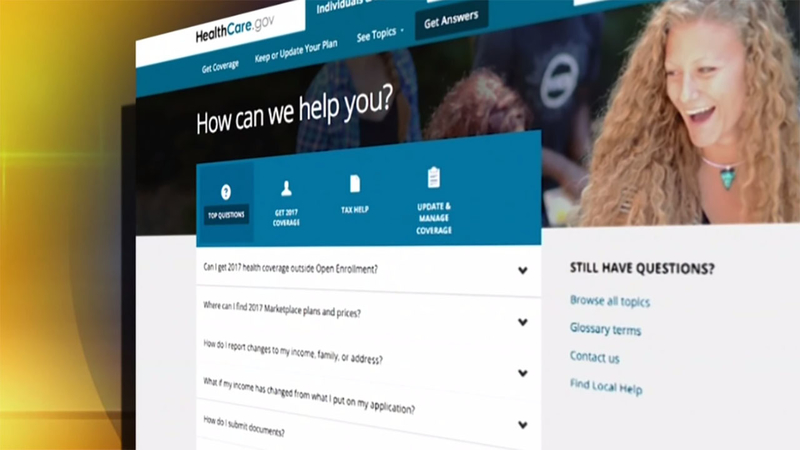 RALEIGH, North Carolina (WTVD) -- Like a patient battling a chronic illness, the HealthCare.gov insurance marketplace has had its ups and downs.

Despite repeated efforts to repeal the law, the Affordable Care Act's open enrollment period began its fifth year Monday, offering millions of Americans the opportunity to buy health insurance and apply for government subsidies to help pay for it.

Last year was a banner one for the program: 12.2 million Americans enrolled, including 549,158 from North Carolina (fourth most in the country), and 149,744 in the Triangle. The data also shows 31 percent of those who signed up in did so for the first time. National data shows 63 percent of users are ages 18-55 and 54 percent are female.

The new year, however, does bring with it rising prices, fewer options, and a significant cut in time and attention from the federal government; the enrollment period ends December 15 - seven weeks earlier than 2017's enrollment period (January 31). The Trump administration also slashed the advertising budget for HealthCare.gov by 90 percent.

"There's been so much confusion about whether it's still the law and whether it's great coverage," Jennifer Simmons, of health care advocacy group NC Navigator Consortium, told ABC11. "The financial help is exactly the same as it was during the last open enrollment period, so we're really hoping people come back and sign up." (NC Navigator and other organizations are hosting dozens of events and office hours to help people sign up).

Indeed, the Department of Health and Human Services reports an average of 37 percent increase to a benchmark premium, but it comes with a 45 percent increase in advance premium tax credits. In North Carolina, the premiums are rising at about 15 percent, according to the report.

"This is a shorter enrollment period than previous years," said NC Department of Insurance Commissioner Mike Causey. "If you do not have health insurance elsewhere, you need to take part in Open Enrollment to make sure you choose the best insurance plan to meet your needs as well as determine if you qualify for tax subsidies to offset premium costs."

"The N.C. Department of Insurance is in full support of giving consumers broad access to quality, affordable healthcare," said Commissioner Causey. "We are doing our best to maintain a stable health insurance market that provides new products and more choices."