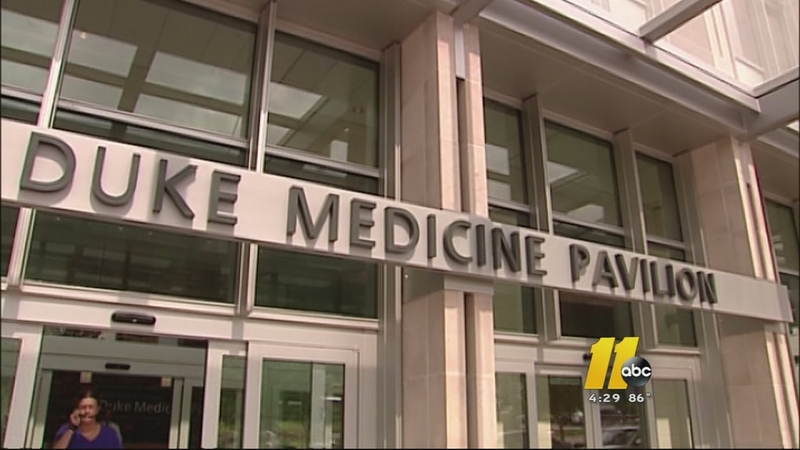 DURHAM (WTVD) -- This weekend, Duke Medicine is celebrating a major milestone, having successfully performed more than 1,000 heart transplants, ranging from patients under the age of one all the way up to 76 years old.

The high numbers and high success rates have earned the hospital the reputation as being one of the premier heart transplant and heart treatment centers in the nation.

Durham resident Tesca Kinard is one of their success stories. Today, she's the happy, healthy and proud mother of two grown girls. However, in the not so distant past, she almost lost her longtime battle with heart problems.

"My electrical cords in my heart were abnormal. It would cause me to go into V-fib, which is one of the worst abnormal heartbeats you can have, and you can actually die if someone is not around to give you CPR," explained Kinard.

In all, she suffered heart failure seven times over the years, including an episode in March of 2013.

"I realized I had gone into cardiac arrest again, and my youngest daughter was here, so I was able to get myself together and stumble to her room," recalled Kinard. "And I opened the door and all I could say was, 'Kayla, help me.'"

Kinard was rushed to the hospital where she stayed for a week, and then one month later she was put on the heart transplant list. Yet, before she could get a new heart, she suffered another near fatal episode on the morning of her daughter's senior prom. Luckily, her daughter was there and gave her CPR till help arrived and brought her back to Duke.

"Exactly two weeks from being in the hospital I got that call I'd been waiting for, saying that I had a donor," said Kinard with a smile.

That was on June 1, and by the next day she had a new heart. It was an experience that she says proved not only lifesaving, but also life-changing.

Kinard's story is one of many for the cardiologists at Duke, as the hospital has performed more than 1,000 heart transplants since roughly 1985.

"There are not many centers in the world that have accomplished this feat of 1,000 transplants over the lifetime of their program," remarked Dr. Chet Patel, the Medical Director for Cardio Transplants at Duke. "Now in the last five years, we've done between 60 and 70 heart transplants a year, which puts us in the top five programs in the country."

Dr. Patel said part of their expanded reach is due to the fact that they've found ways to perform transplants on older patients.

"In most centers around the country, they do not allow for heart transplants over the age of 65. We have been able to do that by taking organs that may be from an older donor," he explained.

Plus, the hospital is using some of the very latest technology in implantable heart pumps to help buy patients more time.

"I think we've been able to expand our therapeutic reaches by the use of support devices, or ventricular assistance devices and we actually have one of the largest programs in the United States," pointed out Dr. Joseph Rogers.

As the former Medical Director and a current Heart Transplant Cardiologist at Duke, he's seen how far the program has evolved, especially in the last 10 years.

Dr. Rogers said using the pumps alone can extend a patient's life, on average, five years. Duke's patients are seeing an average of six years with the devices. As for a heart transplant patient, they can see their life extended by an average of 13 extra years. Plus, besides time, doctors say they see an improved quality of life.

"Typically, this group of patients has about an 80-90 percent risk of dying in the next two years, which is as bad as any cancer. And these patients are severely limited so they are breathless, they fatigue very easily, and have incredible functional limitations. But, I think these people are living a much better life then they were living with a much better prognosis than when they were trying to live with advanced heart failure," Dr. Rogers remarked.

And now this weekend many of those patients will be coming together for a reunion celebrating Duke passing the 1,000th heart transplant milestone earlier this year.

"It's a wonderful celebration of and recognition of all of the people that have been involved in this program," beamed Dr. Rogers.

The event takes place this Sunday at the Duke Washington Inn from 12 p.m. to 3 p.m. and it could break a record for the most heart transplant recipients in one place. The Guinness Book of World Records has been invited.

Meanwhile, cardiologists and Duke staff are hoping all this publicity will remind people of the importance of being donors, as the need for hearts still far outweighs available donors.