Harnett County family wins lengthy battle to get $54,000 owed to them from unnecessary Medicaid deductibles 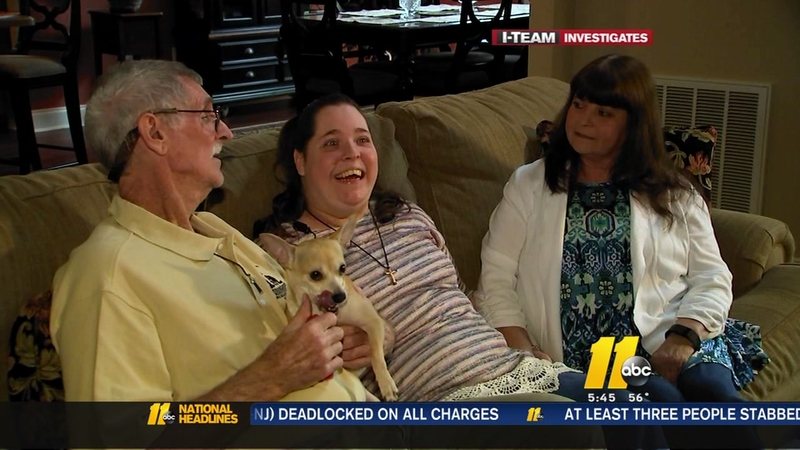 HARNETT COUNTY (WTVD) -- It's been a long emotional battle for the Lewis family. But, it was a fight they weren't willing to give up on as there was more than $50,000 at stake.

The money in question revolves around Medicaid deductibles that the couple should not have had to pay, over a number of years, in relation to the care of their daughter Natalie - who has cerebral palsy.

When she was a teen, Natalie was on Medicaid and was part of the Community Alternatives Program for Children Program (CAP/C).

Since she had Medicaid and was enrolled in the program, Natalie qualified for in-home care, which her parents said they desperately needed to help care for her.

"She was going to lose her Medicaid services," said Natalie's father Perry Lewis.

Perry said they were told Natalie would no longer qualify for Medicaid due to how her Supplemental Security Income (SSI) was being calculated with his.

That meant she would no longer have in-home care as Medicare doesn't care it.

"So, we had a tough decision to make when we received that notification that she was going to lose her Medicaid unless we paid the monthly deductible," Perry said.

The concerned father said they did not want to put Natalie in a home, so while it would be financially tough, the family decided to pay the monthly deductible of more than $650-750 so she could keep her in-home care.

"Every month, we had to come up with that money," he explained.

The Lewises kept paying until 2016 when they learned a mistake was made in Natalie's case.

"She said your daughter qualified for the 'passalong policy;' you should have never had to pay for these deductibles," Perry said.

The Lewises said they had to hire an attorney and spend more than $1,000 to appeal, but they won, and Harnett County reinstated Natalie's Medicaid benefits.

The county did go back one year and reimburse them for the deductible payments they made each month for that one year, but that was it.

If you'd go back to 2009, when Natalie lost her Medicaid benefits, it totaled more than $50,000 in unnecessary deductibles.

The family took their battle back to court and had to once again pay out of pocket.

It took some time but the judge ruled in their favor. But even after winning, Perry said they still haven't received money from the state.

"I understand the mistake, but the good moral thing is how you correct the mistake, make it right, and I'm kind of disappointed how that's been done," Perry said.

I got in touch Harnett County Social Services, the county who's been handling Natalie's case.

They said they've done all they could do, it's now in the hands of the NC Department of Health and Human Services; despite repeated attempts there, the state said they couldn't comment.

After that contact, it didn't take long for the Lewises to finally get welcome relief. They received a check for more than $54,000 - more than enough to cover all the money they paid in Medicaid deductibles.

Despite the lengthy and costly fight, the family said they aren't bitter.

"We are so thankful for the programs in place that help Natalie," Perry said.

The Lewises said they're speaking out to let other families about the Medicaid passalong policy.

Perry said if they didn't pay those deductibles, they would have been forced to put Natalie in a facility.

This is a good reminder that no matter what type of insurance you have, if you're denied services, explore your appeal options. While this has been a long battle for the Lewises, in the end, they said it's been worth it.

ABC11 has decided to slowly reduce the number of stories on the website that have a comments section. We believe very strongly that our audience should have an opportunity to discuss and debate events in our world, however, we have not been able to moderate the comments as well as we would like. Instead of hosting a platform that could allow a few loud and ugly voices to dominate a conversation, we want to encourage everyone to join us on our social media platforms and speak out there. Facebook: facebook.com/ABC11 Twitter: twitter.com/ABC11_WTVD
Report a correction or typo
Related topics:
health & fitnessharnett countyhealthinsurancetroubleshootercerebral palsyharnett county newsmedicaid
Copyright © 2021 WTVD-TV. All Rights Reserved.
TOP STORIES
CDC reverses course on indoor masks in some parts of US
800K COVID-19 vaccine doses in NC could expire by end of August
Black Lives Matter billboard set to go up in Elizabeth City
LATEST: Cooper to 'review changes to CDC guidance'
As COVID-19 cases surge, nervous parents prepare for school year
Why this Haitian restaurant relocated from Brooklyn to Edgecombe Co.
Show More
Latinos leading the way in new home ownership in US & in central NC
4-year-old dies after report of drowning in Harnett County
Mother, boyfriend charged after 5-year-old's death in Aberdeen
70-75% of Black women impacted by uterine fibroids
Man convicted of killing USC student who mistook his car for Uber
More TOP STORIES News