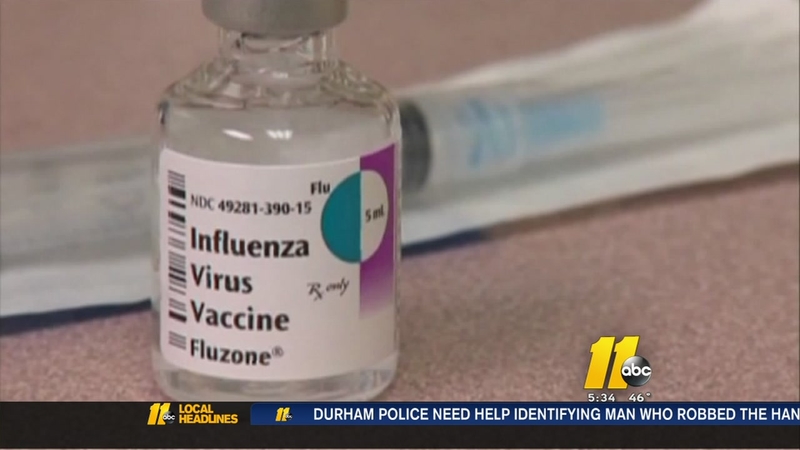 Health officials warn of increase of flu in North Carolina

North Carolina health officials warned Tuesday that we're about to hit the peak of the 2016-17 flu season and the virus is widespread.

They said influenza activity and flu-related deaths are rising. Three influenza-associated deaths were reported during the week ending Dec. 31.

There have now been seven flu-related deaths statewide during this flu season, five of those deaths were people 65 years old or older.

Zack Moore, MD, MPH, Acting State Epidemiologist told ABC11 the dominant strain this season is H3N2, the same strain responsible for driving the flu to epidemic levels in the 2014-2015 season when the flu vaccine was less efficient than expected.

"Whenever we see this particular type of flu virus we pretty much know we're going to see outbreaks in long-term care settings, we're going to see deaths, unfortunately, in people in the older segment of the population," said Moore.

Flu can be a serious illness, especially for adults over age 65, children under five, pregnant women and those with certain medical conditions such as asthma, diabetes or heart disease.

State health officials said they want to see people protect themselves and others. Although vaccination early in the season is recommended, it is never too late to get vaccinated and help protect yourself and others from the spread of this dangerous, sometimes deadly virus.

Moore said this year's vaccine is well matched to the viruses health officials have seen so far.

"Flu will still be circulating for at least the next several weeks," said Moore, "Getting vaccinated now helps protect you and those you come in contact with."

Moore encourages everyone to use precautions to protect against the spread of flu and other viruses, including:

-Wash hands frequently, preferably with soap and water or an approved hand sanitizer
-Cover coughs and sneezes with a tissue and then discard the tissue promptly
-If you are sick with flu, stay home until you have been fever free for at least 24 hours

The number of flu-associated deaths reported in North Carolina since 2009 has varied from nine during the 2011-2012 season to 218 during the 2014-2015 season.
Related topics:
health & fitnessraleighflunorth carolina news
Copyright © 2021 WTVD-TV. All Rights Reserved.
More Videos
From CNN Newsource affiliates
TOP STORIES