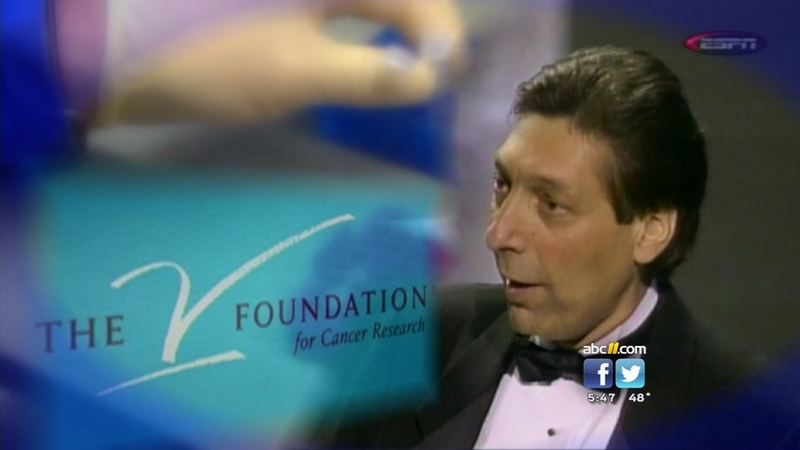 DURHAM (WTVD) -- Not a Moment to Lose - that's the name of The V Foundation's new $200 million fundraising campaign, and cancer researchers at Duke University know all too well that every moment and every dollar counts in the fight against cancer.

"Not only finding better cure rates but also finding better, less toxic, ways to treat it," said Armstrong of his mission. "I mean right now, we kind of use the sledgehammer approach with neuroblastoma."

Neuroblastoma is what landed 5-year-old Caroline Britt of Wake Forest at Duke when she was only 2. Armstrong said her case was considered high risk and treatment is only effective in half of those types of patients.

"If we can understand why a particular cancer arises, then maybe we can target those tumor cells only and not affect so much the normal cells," said Wechsler.

Wechsler knows the research being done is critical, but the thing about research he said, is that it takes a long time.

"We would love to be able to sort of do something and see it translated to a patient in a couple months or a couple years, but it often takes decades for it to happen," he said.

But now, as part of the V Foundation's Not a Moment to Lose campaign, Duke is getting $1 million in grants; Armstrong was just awarded with $80,000 of that to continue his work on neuroblastoma.

"Support from the V Foundation's really helped me develop a new model using a mouse model of neuroblastoma, trying to find ways to shut down the N-Myc protein which really drives the disease," he said.

GMA's Robin Roberts, a breast cancer survivor and V Foundation board member made the big announcement during Monday night football.

George Bodenheimer, campaign chair and former ESPN president, told Eyewitness News it's the most significant fundraising campaign in the history of the foundation.

"We stand for victory over cancer," Bodenheimer said. "That was Jimmy Valvano's goal at that speech at the 1993 ESPY's, to defeat cancer. And that is what we're after. So raising the funds are just a means to that end and that's what we're in it for."

"Never give up. I think those are the best words anybody's ever said," she said. "I definitely think that we're on track to beat cancer."

Caroline's doctor thinks so too.

"Science is fun and it's interesting, but having a goal of actually curing patients and making a difference in their lives, that's why we do it," said Wechsler.