Study: Being tall is a positive trait for white men; For black men, not so much 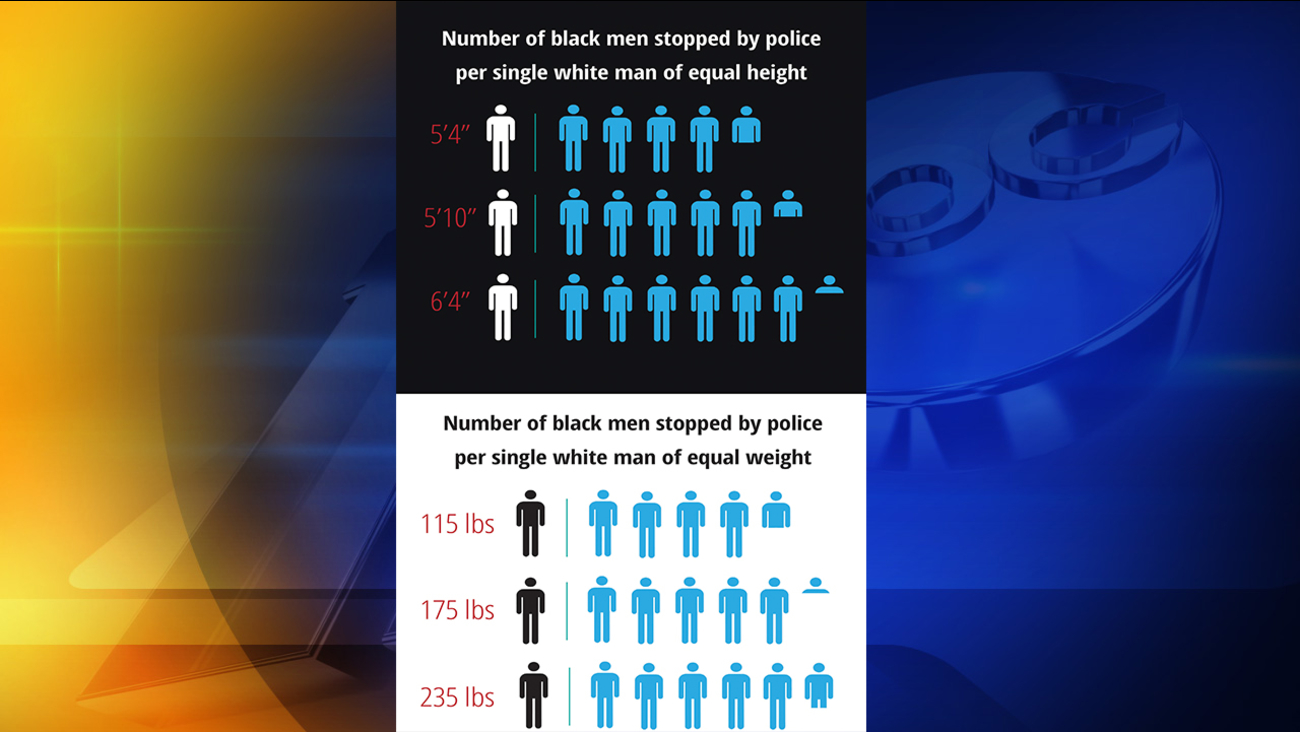 CHAPEL HILL, N.C. (WTVD) -- While being tall is an obvious bonus for basketball players, height might just as successfully get you a raise and a job in a boardroom.

Especially if you're a white man.

Height, especially for men, is typically associated with confidence, competence and health. But according to researchers at the University of North Carolina at Chapel Hill's social psychology department, those positive perceptions are only skin deep.

According to a study published in February, the professional benefits and "good" traits typically perceived in tall men are luxuries enjoyed only by white men. For black men, perceptions of attractiveness and intelligence are flipped. Being tall and black carries a connotation of incompetence and danger.

Professor Kurt Gray and Neil Hester, a graduate researcher studying how race and other social categories interact to influence human judgment, published the study, titled, "For Black men, being tall increases threat stereotyping and police stops." Their research challenges long-held notions of what height means for white men versus black men in the American workplace and social sphere.

Hester and Gray first reviewed nearly a decade of stop-and-frisk encounters from the New York Police Department, a collection of more than 2 million interactions between officers and civilians. While the stop-and-frisk initiative was ultimately struck down for targeting minority groups, Hester and Gray found race to be just one relevant factor in the inflated number of black men stopped in New York - taller black men were especially likely to receive "unjustified attention" from police, they concluded.

Hester and Gray noted that for every white man who was 5'4" tall and stopped by police, 4.5 black men were stopped. Six inches taller and that figure jumped to 5.3 black men per white man. For black men 6'4" tall and higher, 6.2 stops were made for every white man.Hester and Gray followed that survey with a controlled study that echoed their findings from the stop-and-frisk data. Two experiments suggested those who stereotype black men as threatening are likely to view a taller subject as more dangerous than one manipulated to appear shorter. Participants who did not stereotype one race as more dangerous than the other were unaffected by the changes in height.

Some of those factors are situational. For instance, in a job interview,

"I think it's important to understand that the ways race influences our judgment are not straightforward or linear," Hester said. "Effects of race are more nuanced. The effect of being black or white relies on how it intersects with a lot of other factors, like gender and age, but also height, weight or the way your face looks."

There's an inherent context of professionalism as opposed to danger, and perceptions of threats are likely to be dulled regardless of race.

This conflicts with a more casual situation, like a tall black man walking down the street at night, in which Hester and Gray's research suggests both police and civilians are more likely to perceive the man as a threat.

Even on a college campus, being tall, male and black burdens many with that perception of danger. Height is a factor of identity that means different things to tall white students versus tall black students in Chapel Hill.

John Flye, 21, is a junior business major from Charlotte. He's 6'5", he played basketball and football prior to college, and he's white.

Chandler Evans, 22, is a senior English major from Goldsboro. He's 6'3" and he also played basketball and football prior to college. He's black.

Flye recalled aching joints from growing pains while growing up, but other than stray comments from strangers about his height, he said he doesn't think of or even notice his size often. He said he recognizes his height mostly when he goes to grocery stores, where short women often ask him to reach the top shelf, or when he's around a group of shorter people.

"If I walk into a room and I'm the tallest one there, I do feel confident," Flye said. "I don't know why. I wouldn't say I look older than people, but I might seem more professional. It's not them judging me, I don't think, I just feel more confident."

Many young black men, like Evans, have a different relationship with their size.

Evans said he's constantly aware of his height. He fields questions about his size from strangers almost daily. He'll catch a rare suspicious glance from a customer at the Wells Fargo where he's a teller. Some customers will forego his booth for another, smaller, white teller. And still, in the final semester of his college career, Evans hears a familiar question on campus: "Which team do you play for?"

"People have always looked at me for my size, not my potential in the classroom, so in most cases I have to monitor how I'm looking," Evans said. "If you're in a room full of people, and as a bigger guy you're going to be noticed first, you don't want to look unpleasant or you can draw the wrong kind of attention."

At work, Evans tries to make sure his facial expression and overall demeanor can't be mistaken as negative or hostile. He said he's drawn the wrong kind of attention in certain circumstances since he hit his growth spurt.

His mom taught him to always exercise excess caution, because as a bigger black man, he would likely be the first person questioned if anything went wrong.

In high school, Evans said there was a disparity in reactions to him between students who knew him and those who didn't. Friends were familiar with his success on the field and in the classroom, but those unacquainted with Evans, he said, often characterized him as "spaced out" or a "big dumb guy" because he didn't look like what his accolades made him out to be.

"I'm 6'3", 260 pounds, and I have dreadlocks," he said. "I'm pretty imposing when I don't monitor how I look. But when I look at myself, I just see myself, I don't see me being very hard to approach. It's hard to break away from the idea that you're normal to yourself, but you're not really normal to someone who isn't used to seeing you."

Hester said height, skin color and even the shape of someone's face are just a few of the factors that influence how people perceive one another. Many people likely see a tall man and get the same impression of health and professionalism, regardless of race. But according to Hester and Gray's findings, others have a starkly opposite reaction to height based on the color of someone's skin.