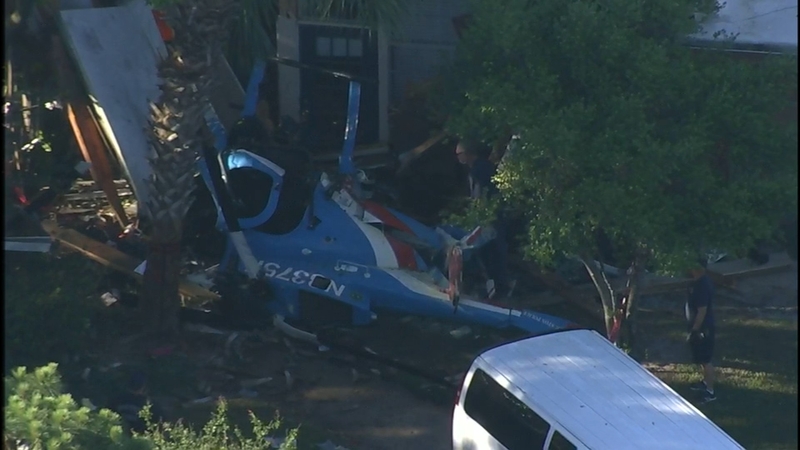 HOUSTON, Texas -- A Houston police helicopter crashed early Saturday, killing one of the two officers on board and critically injuring the other, while assisting a call to search for bodies in a nearby bayou, officials said.

The department the officer who died as Tactical Flight Officer Jason Knox. He is survived by a wife and two young children, who were at the hospital along with his parents and in-laws, Acevedo said.

"We're going to miss him," Acevedo said. "He had a heart of gold, integrity second to none."

No cause for the crash was given and Acevedo said the National Transportation Board and the Federal Aviation Administration would investigate while Houston police conduct a separate homicide investigation.

Acevedo noted that shots rang out across the street from the scene at around 3 a.m. and six people were taken into custody.

The aircraft appeared to spin out of control before crashing early Saturday morning.

The crash investigation would explore whether the helicopter was struck by gunfire, Acevedo said, noting instances in his previous work in Austin and California when police helicopters were fired upon.

The pilot, Senior Police Officer Chase Cormier, was "very banged up," and had serious injuries, but was conscious Saturday afternoon. There were no injuries to anyone on the ground at the apartment complex, a masked Acevedo told reporters.

The helicopter was supposed to assist with a search for bodies in a nearby bayou, which was prompted by a tip that the police chief characterized as "probably a bogus call - we don't know."

"No evidence to date of any bodies in the bayou," Acevedo said.

The officers were trapped in "mangled" wreckage and it took firefighters about an hour to cut them out, Acevedo said. The helicopter did not catch fire and avoided striking occupied apartment buildings. It did clip the Biscayne at Cityview apartment complex's clubhouse.

The police department is shutting down flights until it has a chance to reassess in the coming days, and will be relying on the Texas Department of Public Safety and Harris County Sheriff's Office for flight support in the interim.

Acevedo identified the helicopter as "75 Fox."

"It's pretty ironic that yesterday we graduated a class and we had Fox fly out because we had COVID, so we couldn't do your traditional graduation so we wanted to do something special," Acevedo said. "And if somebody had told me that a few hours later that we had an aircraft down and we'd lose a really good man, I would have said 'No way.'"

Turner, the mayor, called on the people of the city "to continue to lift up, number one, both families, but especially lift up the family of the police officer who has died this morning. And then at the same time lift up the entire HPD family."
Report a correction or typo
Related topics:
houstonpolice officer killedhouston police departmenthelicopter crashu.s. & world
Copyright © 2022 KTRK-TV. All Rights Reserved.
TOP STORIES
NC weather: Cold now, snow to start this afternoon
Black ice causing treacherous road conditions already
Schools in Wake, Durham counties to close Friday
US confirmed 1st COVID case 2 years ago today
How to drive on snow, ice and get out of a skid
Many COVID-19 vaccine side effects caused by placebo effect: Study
'So much deceit': Brother of Lori Vallow speaks out on family divide
Show More
Meat Loaf, 'Bat Out of Hell' rock superstar, dies at 74
'Wheel of Fortune' contestant gets her Audi after bonus round pause
SPONSORED: Big Weather's Big Recipe: Caramel Puffcorn
Contact tracers' role changes as pandemic reaches new heights
Flavor District, Triangle's largest 'ghost kitchen' to open in fall
More TOP STORIES News