The matchup everyone wanted: Wake Forest vs. Middle Creek 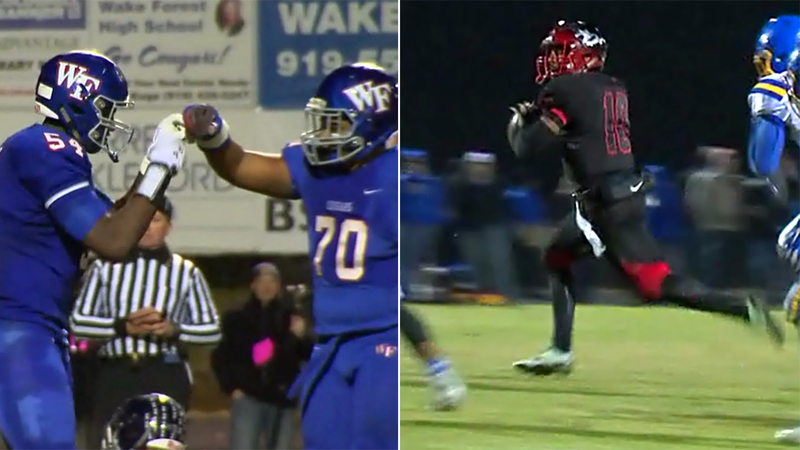 It's the high school showdown everyone has been waiting for

APEX, North Carolina (WTVD) -- A combined 28 wins against zero losses -- this is the matchup many expected in the 4AA Eastern Final.

The last time Middle Creek and Wake Forest high schools met at this stage of the football season, back in 2014, we got a classic.

Friday night, it's all on the table again as the Mustangs and Cougars meet at Middle Creek.

The two undefeated teams actually scrimmaged in the preseason.

"Well, I think everybody's finally got the matchup they wanted with Middle Creek and Wake Forest," said Middle Creek coach Randy Ragland. "We're going to have to find a way to score points; that's going to be a hard task on Friday night."

Meanwhile, Wake Forest head coach Reggie Lucas isn't coaching in the Army All-American game by accident -- the man knows his stuff - and Lucas also knows that the Mustangs have an electric offense.

"We don't want to give up the big plays," Lucas said. "Obviously with an explosive offense like that, you would expect them to score. If they go up on us, we don't want to panic, we want to stay in the game."

Jake Campbell, a linebacker for the Cougars, is looking forward to the challenge posed by Middle Creek's Mustangs.

"We scrimmaged them early in the season, and this is the game we've all been waiting to see," Campbell said.

Wake Forest's Xach Gill, a top defensive line recruit, will choose between North Carolina and Virginia Tech next Monday. But he'll have more pressing business Friday. Three times the Cougars have come up short in state title games in the last six years.

This group wants to break through.

"It's our goal at the beginning of the season," Gill said. "Accomplishing your goals is a good thing."

The Cougars give up only about 6 points per game. The Mustangs average about 47 points per game scoring, so Friday night, something will have to give, and one perfect season will come to an end.