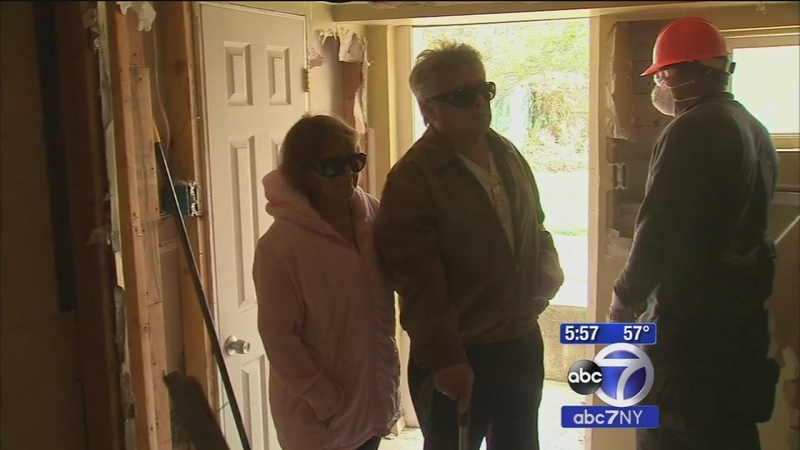 FREEPORT, N.Y. -- It's been three years since Superstorm Sandy hit hard, and even now there are still thousands of homes that need repair and families that need help.

But there is a happy ending for one family that's home is finally fixed. 57-year-old Merdardo Sosa has been feeling his way through a nightmare these past three years.

The nightmare of Superstorm Sandy, and like many on Long Island's south shore, the wait for home repair has been never-ending.

The home Sosa and his family have lived in for more than a decade took in six feet of water in the storm leaving behind mold. He was waiting on repairs, but then life got in the way.

There were nine surgeries, and then came the phone calls from the bank.

"Yes, definitely, I had been fighting with my bank, they wanted to take away my house," Sosa said.

Fortunately, the Hispanic Brotherhood of Rockville Centre stepped in and so did United Way, and the Health and Welfare Council of Long Island. Tuesday, workers began gutting Sosa's first floor and basement.
While all of this is great news for the Sosas, it's estimated that 3,500 other Long Island families, are still waiting on help.

"This is not the end. Thank God we haven't gotten another hurricane, but it's a little bit of a disaster," said Margarita Grasing, of the Hispanic Brotherhood of Rockville Center.

"The further we go away from the impact of the storm, the more complex and the more expensive, the rebuild and recovery becomes," said Gwen O'Shea, of the Health and Welfare Council of Long Island.

But for one family, there is finally a light at the end of a three-year long tunnel.

"I just want to tell them not to give up. Just like I have been helped, they can be helped too," Sosa said.