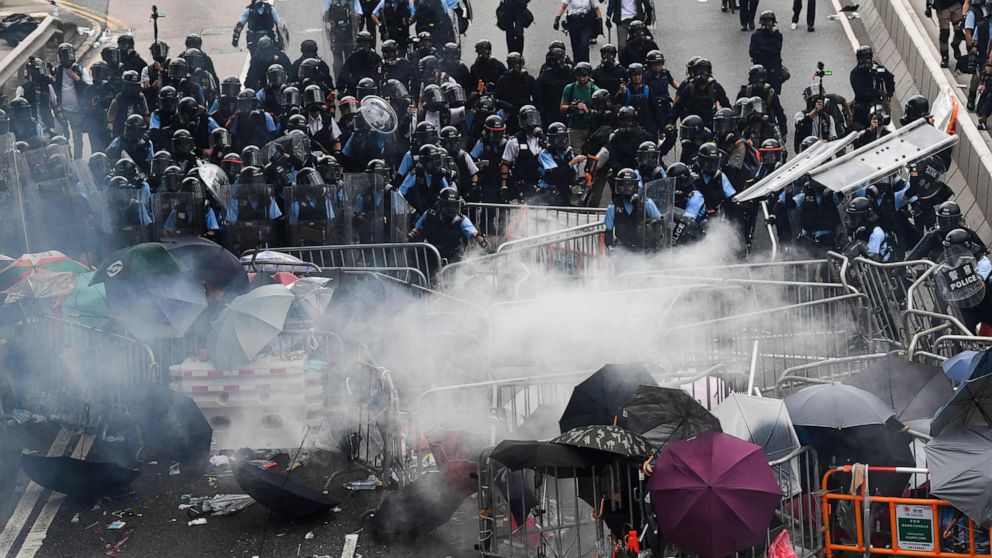 It's quite a thing to see youngsters being tear gassed. Some as young as 15 struggling to breathe around us, crying from the shock of what I imagine was their first experience of such force.

As a foreign correspondent for ABC News, I have been in Hong Kong to witness massive protests over the government's proposal to change an extradition law. On Wednesday, I watched as police fired tear gas at throngs of those marching in the streets.

Of the tens of thousands of people we saw, the vast majority seemed to us in their teens or early 20s. It was inspiring to see those who are so young be so politically aware, if not heartbreaking that they need to be.

Growing up in the shadow of China can't be easy. To feel that the freedoms you've enjoyed your whole life are dissolving in front of your eyes. The anger is palpable. As with most protests, a small minority here has come spoiling for a fight - but don't confuse the face masks worn by protesters with the attire of anarchists.

Beijing will take full control of Hong Kong in 2047 - that's when the Basic Law that underpins the city's autonomy expires. But to many Hong Kongers, the retaking of Hong Kong is already here.

The extradition law goes to the heart of an issue this city has been grappling with for years: increased mainland Chinese meddling in their affairs. The leadership here is adamant that this law needs to pass in order to ensure Hong Kong doesn't become a haven for Chinese criminals; that of the 37 crimes that would qualify for extradition, none of them is for a political offence.

But political enemies don't require the breaking of political laws to be vulnerable to arrest by less than democratic regimes. The Hong Kong booksellers are a good example - they vanished in 2016 after having sold disparaging books on Beijing's leadership, only to be charged for unrelated crimes on the mainland. There was no trial, by the way. They all 'confessed.'

Many here feel this law would give Beijing the access it needs to take anyone it wants.

Most of the kids we spoke to are pretty sure this bill will pass. "If we are going to die, we might as well die fighting," 21 year old Luke told me the other night.

Their one saving grace could be big business. In the context of a simmering US China trade war, the fear is that Beijing uses these measures to target foreign executives in retaliation for the sanctioning of Chinese companies abroad. And Hong Kong is all about business: If more major international companies pile on the pressure, maybe something might give.

It's more likely though, that an administration incensed by unprecedented dissent hardens its resolve, and Hong Kong's special status slips further away still, along with the hope of its youngest generation.
Report a correction or typo
Related topics:
abc newsnational
Copyright © 2020 ABC News Internet Ventures.
More Videos
From CNN Newsource affiliates
TOP STORIES