Historical markers disappearing too fast for North Carolina to replace 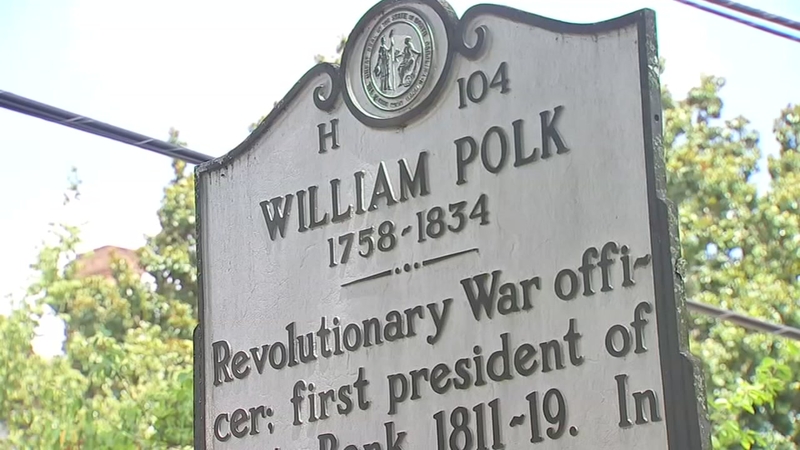 Historical markers disappearing too fast for North Carolina to replace

RALEIGH (AP) -- Hurricanes, thievery and wrecks are taking out North Carolina's popular historical highway markers faster than the state can keep up.

More than 1,600 of the markers known as "history on a stick" stand along state roads, telling the stories of people and places that shaped the past. Each of state's 100 counties has at least one of the silver-and-black signs .

Now, five historical markers are missing, and a sixth that had been missing may be damaged beyond repair, said Ansley Herring Wegner, administrator for the program.

The markers that typically contain about 30 words are popular with the public, and Wegner often gets calls from people seeking more information or - especially in this era - inquiring why a marker doesn't mention a historical figure's white supremacist past.

"I think of the markers as museum labels on the landscape," she said. "It's how we remember what has happened in our state's history and also tie it to a location."

When she took her job in 2014, Wegner began keeping a database of missing markers and found some that had disappeared in the 1980s. Replacing history comes at a cost - $1,790 for each marker made by Sewah Studios in Marietta, Ohio. The annual budget for new markers, repairs and replacements is $60,000, Wegner said.

The program began in 1936, when the first marker was placed in Granville County in honor of John Penn, who signed the U.S. Declaration of Independence. Members of the public can propose a new marker, which are considered twice a year by a committee of 10 history professors.

RELATED: Why there's no historical marker for one of the date's immortalized on the North Carolina flag.

Besides the markers now missing, Wegner has eight new or yet-to-be-replaced markers left over from last year, partially because she ran out of money in May for the fiscal year that ended June 30. The cost of the 14 total markers would be more than $25,000 - almost half of the current fiscal year's budget.

The missing markers commemorate Gov. Locke Craig in Asheville (possibly taken down by a wreck); Fort Caswell in Buncombe (the victim of Hurricane Florence or of a contractor who pulled it down with a chain - Wegner has heard both); James City in New Bern (no clue how both marker and post disappeared); and Fort Hancock and Cape Lookout Lighthouse, both on Harkers Island (either blown away by a hurricane or sawed off their posts).

Publicity about the missing Hart's Mill marker near Hillsborough led to Wegner learning that a manager at the local water plant had found it after a trailer had unhitched from a truck and hit it.

"I try not to let them be down for this long," she said. "This six is the most missing since I've been in charge of the program."

Wegner isn't sure how some young men managed to pull down the marker for St. Mary's School in Raleigh in October 2017. They made the mistake of putting photos of Snapchat, which some young women who attended the school saw and reported. Wegner publicized the theft, and the marker was dropped off in a Raleigh park.

The men repaid the $850 cost for the marker's repair, without admitting guilt, she said.

The marker in Rockingham County for O.P. Fitzgerald, a bishop of the Methodist Episcopal Church South from 1890 to 1911, was once found in the yard of a man in Virginia, just across the state border, she said. The man had placed the marker on a post and hung a Confederate flag over it, although Fitzgerald had no connection to the flag, Wegner said.

By the time a police officer in Virginia notified her, the state had replaced Fitzgerald's marker.

Wegner said she's "trying desperately" to get the word out when markers disappear, but she also relies on the public and state Transportation Department workers to notify her. The sooner she knows a marker is missing and why, the more likely insurance will cover the loss.

"If it's in the paper, then they can't have it in their garage. They can't make a coffee table out of it," she said. "If one is on the ground, in a junk shop or a bar ... if somebody sees one in the wrong place, they can call me."
Report a correction or typo
Related topics:
educationncthefthistoryhurricanenorth carolina news
Copyright © 2022 by The Associated Press. All Rights Reserved.
TOP STORIES
Trees down, thousands without power after powerful overnight storm
Record-breaking heat today for Triangle
Driver struggles to get permanent tags for truck bought on Vroom
American Airlines flight veers off runway in Charlotte
Officials remain optimistic as tourism in Wake County booms
Violent crime in Durham up 8% during first few months of 2022
Funerals begin for victims of Buffalo supermarket shooting
Show More
Decrease in home sales predicted nationwide but NC housing market hot
NY high court to determine if Bronx Zoo elephant is a person
Juvenile taken into custody in Wake Forest shooting
911 dispatcher who took Buffalo shooting call put on leave
Wake County Sheriff Baker says he'll seek runoff
More TOP STORIES News