WTVD
By DeJuan Hoggard
GARNER, N.C. (WTVD) -- Garner homeowner Nancy Turner has been in a back and forth with her HOA due to a string of lights hanging from her front porch.

Turner said a recent email from Sentry Management essentially said: "You need to take your holiday lights down."

"Until he's back home, we are going to support him," replied Turner. She is referring to her son who is currently fighting as a member of the U.S. Military.

"She emailed me back and said only seasonal decorations," Turner told ABC11.

HOLIDAY HASSLE: A Garner woman has these red, white, and blue lights up on her home. They are in honor of her son stationed at Fort Bragg. Her HOA covenant rules state the lights must come down after the “holiday season” or be fined. #ABC11 pic.twitter.com/bGs9RNNNe7

Sentry Management's covenant states: OUTSIDE SEASONAL DECORATIONS, DISPLAYED UP TO FIVE (5) WEEKS PRIOR TO AND THREE (3) WEEKS AFTER THE HOLIDAY SEASON. 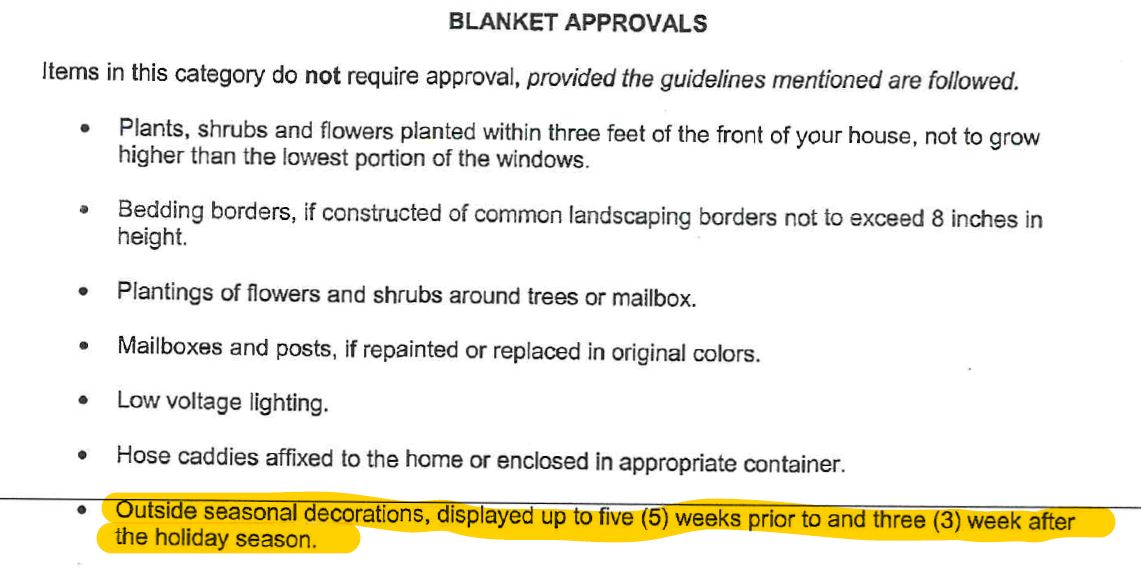 Turner said she was originally told Thanksgiving, December holidays, and New Year's Day were considered the holiday season. However, per Turner, the HOA has since walked back that reference.

Turner's son, who she said cannot be identified due to security reasons, is part of the 82nd Airborne Division stationed at Fort Bragg. He will be approaching one year of service in March. She is also unable to disclose where her son currently is.

"This is what I can do to support my child," Turner said. "There are exceptions to things and we're talking about children fighting for our freedom. Sometimes you have to make exceptions and step outside the box."

"Maybe (the HOA) thought they were our Christmas lights still up," Turner said. "Then I explained they are red, white, and blue. These are one string of lights and that's it. If somebody comes and tells me these covenants are meant for all lights, I will take my lights down."

If Turner does not take the lights down eventually, she will be assessed a fine of $50 a day for every day the lights remain up.

"I don't like the idea of it. But I will pay it to support my child. Obviously if it gets to a certain point I'll say 'OK, I can't afford this anymore'. But until that point is reached, I will pay a fine to keep my lights up."

A Sentry Management spokesperson sent the following statement to ABC11:
For the record these Covenants/Rules are from the Sheldon Place HOA Community for which Ms. Turner resides and as an owner, she signed at closing that she would abide by the Associations Governing Documents.

No further comment - this is a Board matter.
Report a correction or typo
Related topics:
societygarnerfort braggmilitaryhousing
Copyright © 2020 WTVD-TV. All Rights Reserved.
More Videos
From CNN Newsource affiliates
TOP STORIES