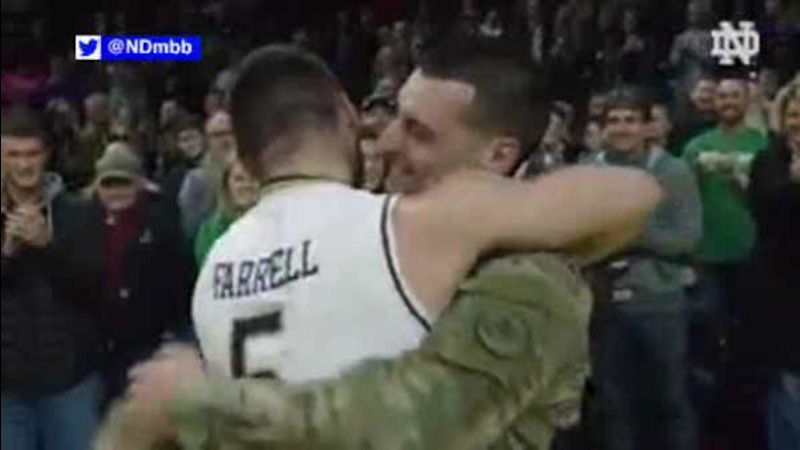 SOUTH BEND, Indiana -- A soldier's homecoming was a slam dunk when he surprised his brother on the basketball court at Notre Dame.

Notre Dame player and New Jersey native Matt Farrell thought he was watching a video message from his brother in Afghanistan.

But what he didn't know was Lieutenant Bo Farrell was much closer ... hiding in the team's locker room.

He came out onto the court after the game and surprised his brother and their parents, who had no idea he was home for the holidays.

The brothers' parents were also surprised to see their son.

And Farrell says his coach, Mike Brey, managed to keep the whole thing a secret.

Brey and his staff had conspired for six weeks to set up the surprise, and even went so far as to prepare the fake video greeting that made it appear Bo was still overseas, just before he walked out to greet his brother.

"He got me," said Matt, who hadn't seen Bo since May. "We don't ask for much for Christmas, so this is the best present I've ever gotten."

Matt joked that he was mad at Brey and the coaching staff for keeping the secret from him for so long.

"He is very upset with me," Brey said with a smile. "What a neat family celebration."