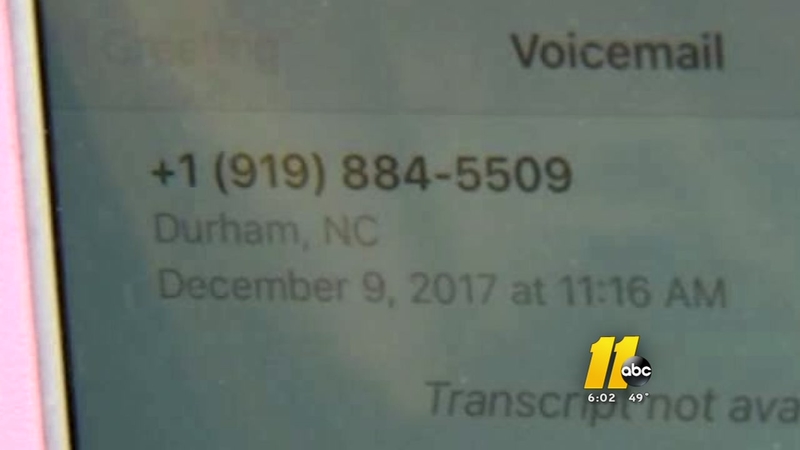 It now appears many people in the Triangle have been targeted by the recent hostage scam.

After breaking the story about the scam Monday, many have called, emailed, or sent messages on social media saying they too have gotten a similar phone call.

Most of those targeted are women who are told their husband has been in a wreck that injured the caller's young son.

They are then told not to hang up and to wire the caller money to help pay for the child's care.

Susan Moore of Wake County told ABC11, "What I don't understand is how he knew my husband was gone to the grocery store. We're retired. We're home most of the time. How did he know?"

But before the caller could make the threat, she hung up on him.

A few minutes later her husband returned home confirming her suspicion it was a scam.

"The guy told me that my husband had been killed in a car accident and he also had killed a 9-year-old child," Potter said. "And when that happened I was pretty shaken. So, I handed the phone to my son's girlfriend and she proceeded to talk to the guy."

In the meantime, she was distraught.

"I was just laying on the seat, you know, hysterical thinking that my husband had been killed in an accident and had injured someone else as well," Potter said.

When she used her son's girlfriend's phone to call and find out her husband was okay, they hung up on the caller.

He called back and left a very threatening two-minute voicemail that included this passage, "I want you to listen carefully, Valerie. This week, we're going to go after you. Okay? I'm going to find you, Ms. Potter. We have your f***ing information, okay. We know who your son is. We even know his f***ing girlfriend, alright. I'm going to kill everybody. Did you understand me?"

Listen to the full threatening and explicit voicemail.

"Even talking about it now it makes me feel nervous because I just can't trust, even though I know it's a scam that someone might, might not be willing to do that."

She also understands why some are doing what the callers ask.

"If I had been by myself, I probably would have fallen for the scam. If I had been alone there's no telling because I would not have had a way to contact my husband to find out that he was okay."

Now that Moore understands what the threats are, she too is sympathetic.

"Because of bodily harm threatened to your loved one and especially if that person's not home at the time," she said.

A Durham man said that's exactly why his wife fell victim to the scam.

The caller told her he had a gun to the head of her 4-year-old daughter.

Her daughter wasn't home at the time and she ended wiring the scammer $1,600.

The Wake County sheriff told ABC11 the scam is a catch 22 for citizens and law enforcement.

Police generally tell people to hang up on anything that sounds like a scam.

But the sheriff was reluctant to say on that on the very slim possibility that a loved one might truly be in danger.

He suggests putting the caller on speaker phone and then texting the loved one or someone who can find the loved one to confirm they are not in danger.