Cary family gets refund after hoverboard catches on fire 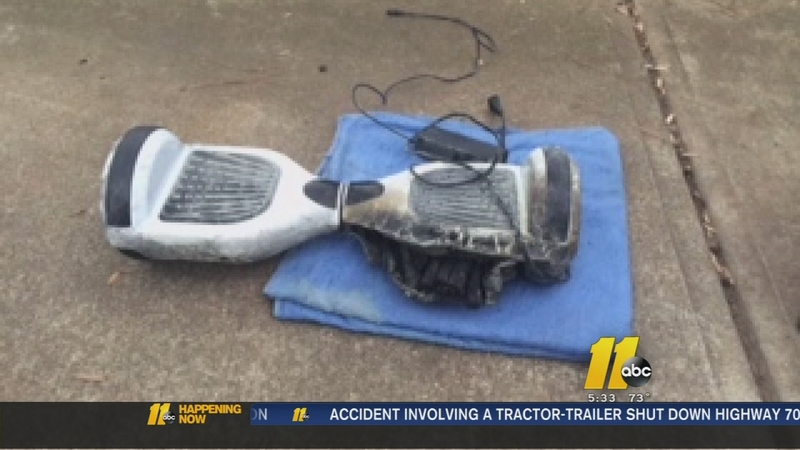 CARY (WTVD) -- A Cary family's smokin' experience with their hot new hoverboard, which prompted a mall to stop selling the device, is ending on a cool note.

Following ABC11 Troubleshooter Diane Wilson's report last week about a 16-year-old girl's Smart Balance Wheel- which is a type of hoverboard - catching on fire while charging, the family is receiving a full refund.

The girl's boyfriend said he bought the self-balancing scooter from a kiosk at Crabtree Valley Mall in Raleigh as an early Christmas gift, and paid more than $400 for the device.

The teen said she enjoyed the hoverboard for a few days with no problems. However, last weekend while it was charging, she said all of a sudden something unusual happened.

"It started swelling and then smoking and then caught fire. It was like a fireworks show; it exploded," she said. "Our friend tried to throw water on it which didn't help because of the lithium battery. My dad grabbed the fire extinguisher and sprayed it and then it lit again. He then sprayed again and while it was still smoking, my dad grabbed it and took it out in the grass and sprayed it again. It continued to smoke for about 20 minutes."

Crabtree Valley Mall did take action after learning of the incident.

Despite receiving a full refund for the hoverboard, the family is now dealing with thousands of dollars' worth of damage to their home due to the fire. They said they want others to realize the possible dangers that come with this popular gift.