How the 'Golden State Killer,' a serial rapist, murderer, evaded capture for decades

ABCNews
By Emily Shapiro
SACRAMENTO, Calif. -- The notorious "Golden State Killer" was behind serial rapes and murders across California in the 1970s and 1980s -- but decades passed before a suspect was identified.

In 2018, Joseph DeAngelo was arrested. This summer, the 74-year-old former police officer pleaded guilty to 13 counts of first-degree murder. And in August, he was confronted by his victims and their family members in court.

Joseph James DeAngelo,who became known as the Golden State Killer, told victims Friday he was "truly sorry" before he was sentenced to life imprisonment.

Here's a look back at the case:

From 1973 to 1976, DeAngelo was a police officer in Exeter, California, officials said.

On Sept. 11, 1975, DeAngelo, while serving as a police officer, shot and killed professor Claude Snelling in front of his daughter at his Visalia, California, home, according to prosecutors.

DeAngelo kicked the daughter three times in the face and then fled, prosecutors said.

Visalia is 10 miles away from Exeter. 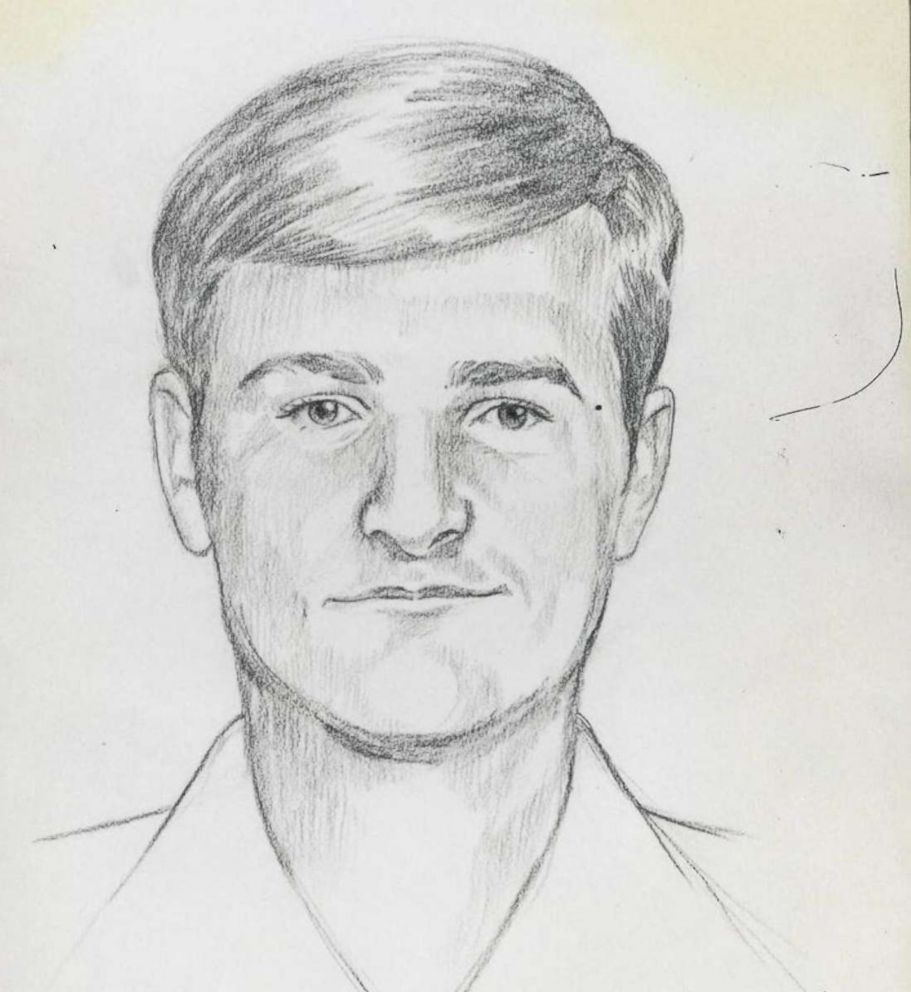 DeAngelo served as a police officer in Auburn, California, from 1976 to 1979.

He was fired for allegedly stealing a hammer and a can of dog repellent, The Associated Press reported, citing Auburn Journal articles from the time.

In the summer of 1976, burglaries and rapes terrorized the eastern district of Sacramento County.

The "Golden State Killer" would break into his victims' homes by prying open a window or door while they slept, the FBI said.

Sometimes he would take jewelry, identification, cash and coins from the victims' homes.

In February 1978, the "Golden State Killer" shot and killed Brian and Katie Maggiore, who were walking their dog in the Sacramento area.

After Brian Maggiore was shot, Katie Maggiore ran away and yelled for help, but DeAngelo caught up with her and shot her in the head, prosecutors said. 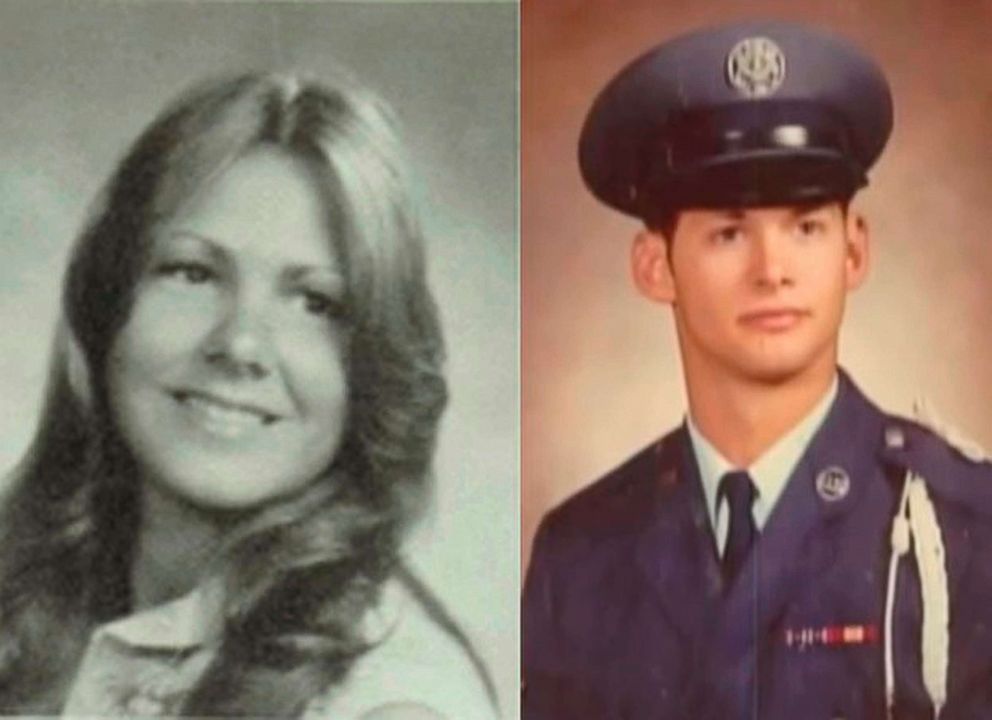 Victims Katie Maggiore and her husband Brian Maggiore were on a walk with their dog in their Rancho Cordova neighborhood when they were chased down and murdered, Feb. 2, 1978.

The burglaries continued in the East Bay area of Northern California, and then escalated into rapes and murders along the California coast, the FBI said.

The "Golden State Killer" would often "attack couples, tie up both victims, rape the female, and then murder them," according to the FBI.

On Dec. 30, 1979, Debra Manning and Robert Offerman were killed in Goleta, near Santa Barbara.

In August of 1980, Keith and Patrice Harrington were slain in their home in Dana Point in Southern California.

On Feb. 5, 1981, 28-year-old Manuela Witthuhn was bound, raped and bludgeoned to death while home alone in Irvine in Southern California. Her body was found by her mother, prosecutors said.

In July 1981, Cheri Domingo and Gregory Sanchez were killed in Goleta. 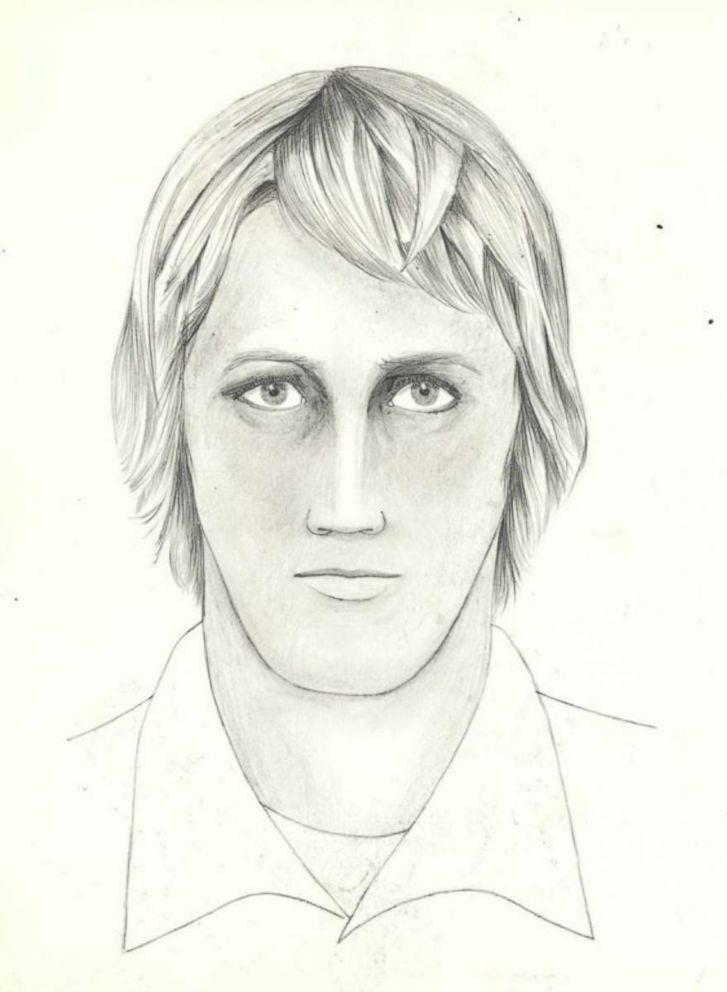 Sanchez was shot and then beaten to death, bludgeoned in the head two dozen times, prosecutors said.

DeAngelo then bound Domingo, raped her and beat her in the head more than 10 times, prosecutors said.

No crimes were attributed to the "Golden State Killer" from July 1981 until May 1986, when 18-year-old Janelle Cruz was killed. Cruz was bound, raped and bludgeoned in the face and head at her home, prosecutors said.

That was his last known crime.

The case went cold for decades.

DeAngelo's name came up for the first time in the investigation in 2018, Sacramento District Attorney Anne Marie Schubert said.

DeAngelo became the first public arrest obtained through genetic genealogy, a new technique that takes the DNA of an unknown suspect left behind at a crime scene and identifies him or her by tracing a family tree through his or her family members, who voluntarily submit their DNA to public genealogy databases.

To identify DeAngelo, investigators narrowed the family tree search based on age, location and other characteristics.

Once authorities zeroed in on DeAngelo, they surveilled him and collected his DNA from a tissue left in a trash.

Investigators plugged his discarded DNA back into the genealogy database and found a match, linking DeAngelo's DNA to DNA found at crime scenes, prosecutors said.

He was arrested in April 2018 in Sacramento County. 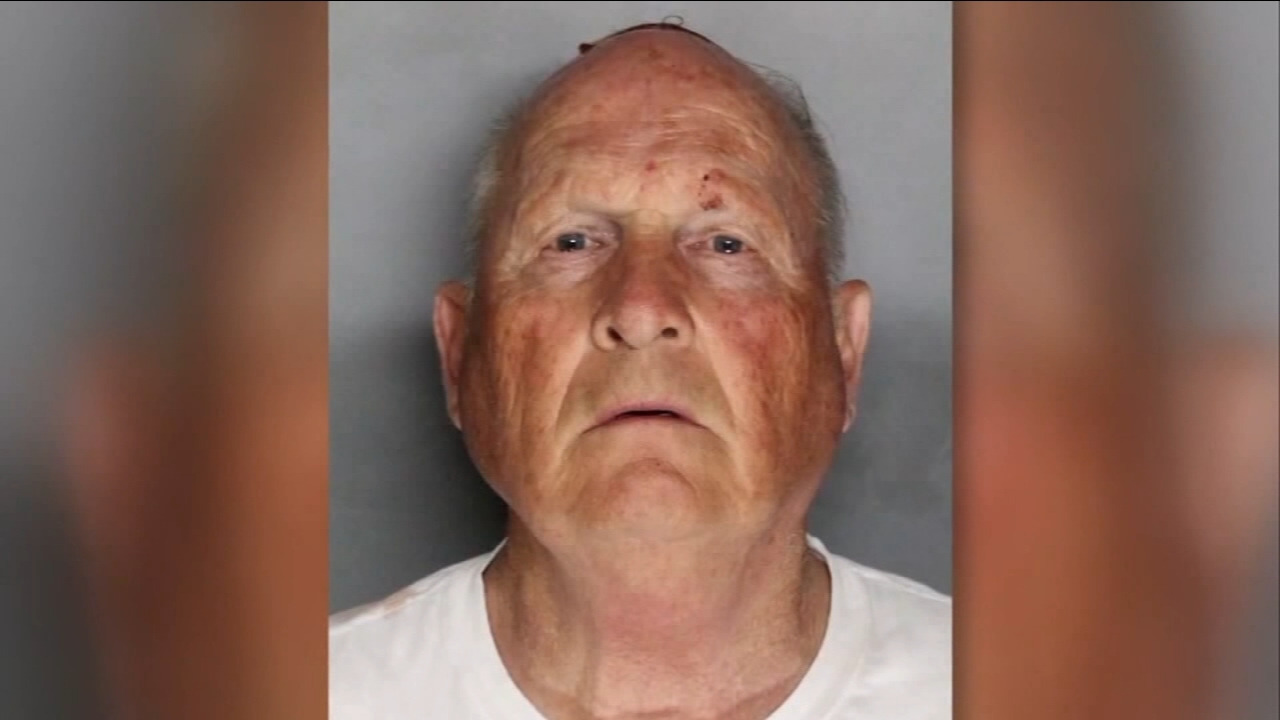 A new update is expected Tuesday morning in the case of Joseph DeAngelo, the man accused of being the Golden State Killer.

After DeAngelo was taken into custody, he said to himself in an interview room, "I did all those things. I destroyed all those lives," prosecutors said in court during the guilty plea.

Since DeAngelo's arrest, over 150 suspects have been identified through genetic genealogy.

On June 29, 2020, DeAngelo pleaded guilty to 13 counts of first-degree murder. The plea deal also required DeAngelo to admit to multiple uncharged acts, including rapes, which were described in horrific detail by prosecutors.

The death penalty was taken off the table and he will serve life without parole, prosecutors said.

Survivor after survivor told stories of fear, grief and resilience. 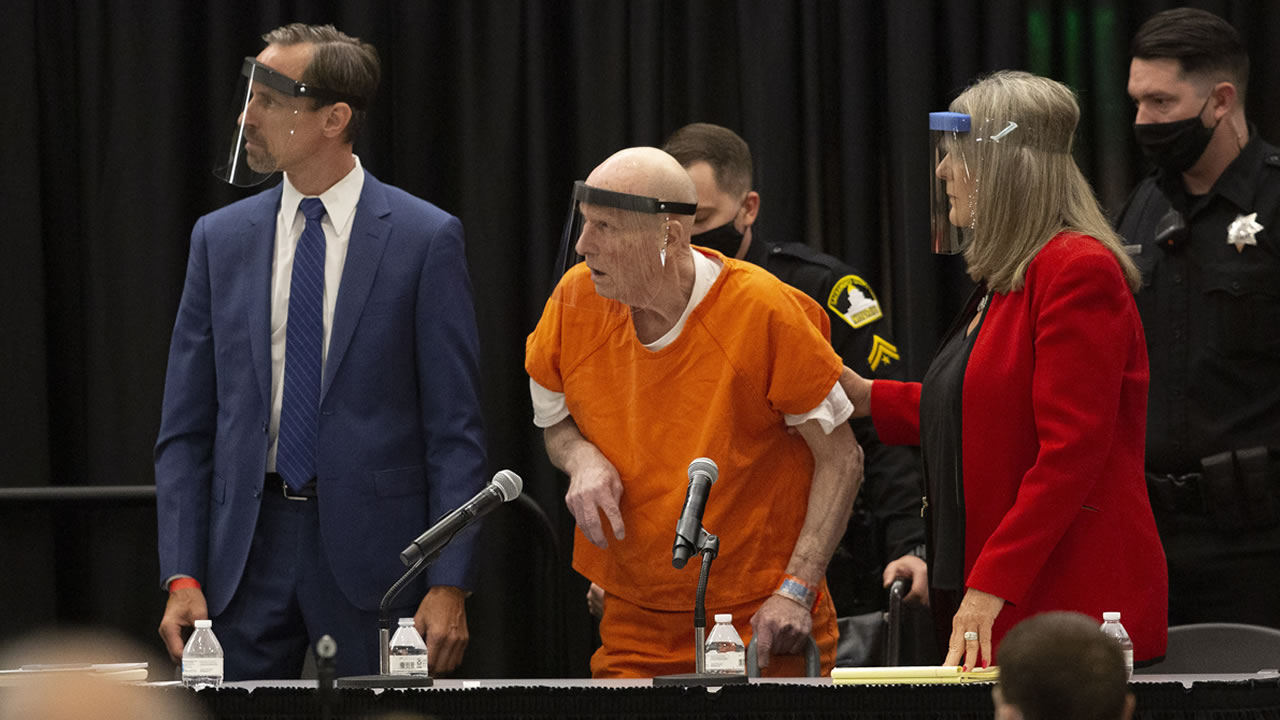 Joseph James DeAngelo, center, charged with being the Golden State Killer, stands in a courtroom in Sacramento, Calif. Monday June 29, 2020.

Jane Carson-Sandler, who was raped in 1976 while home with her son, told the court, "I was frozen in fear beyond description. ... My attention was not on the rape, but fully on where did you put my son when you removed him from the bed? Where did you put him and what were you going to do to him?"

Carson-Sandler said that now, decades later, scars from her attack remain. Seeing a ski mask or hearing someone yell "shut up" will "forever cause me anxiety," she said.

"My comfort at those times is remembering that you are finally going to prison and will remain there until you die," she said.

On Aug. 21, 2020, DeAngelo was sentenced to life in prison without parole. 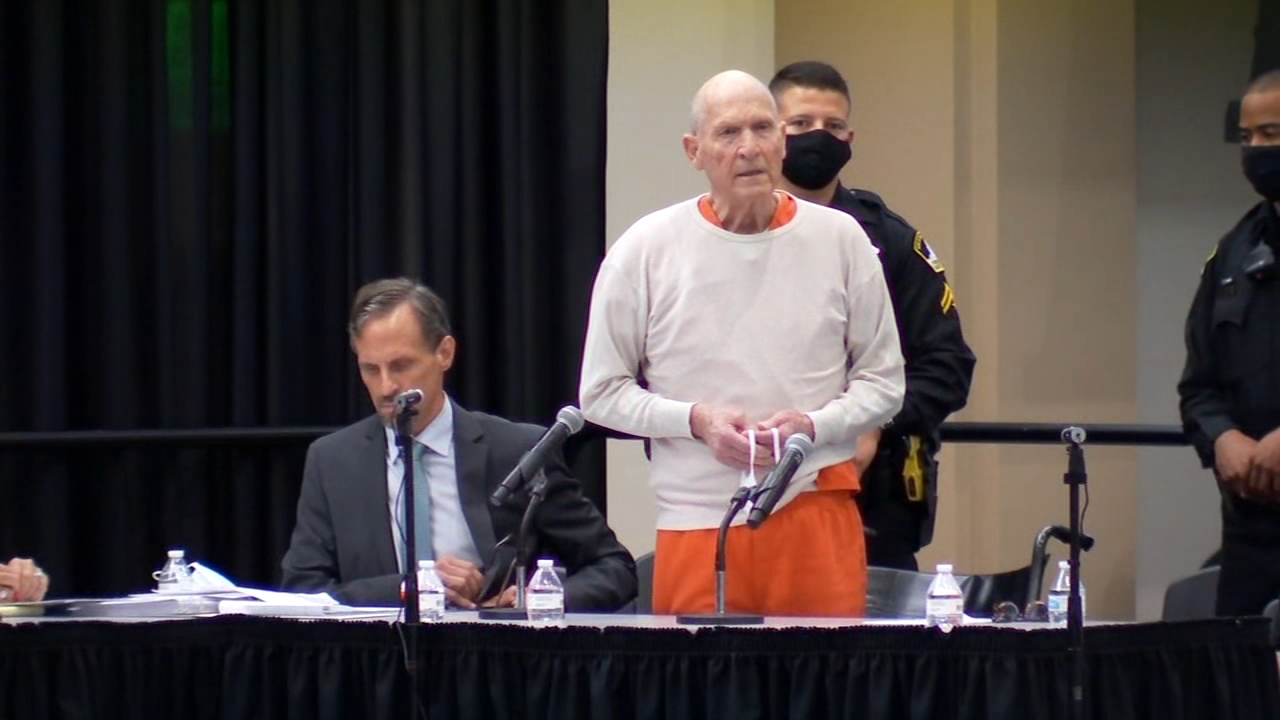 Joseph James DeAngelo,who became known as the Golden State Killer, told victims Friday he was "truly sorry" before he was sentenced to life imprisonment.

DeAngelo, who had sat in a wheelchair and was covered by a white face mask as victims and family members gave statements, rose out of the wheelchair and spoke free of the face covering.

"I've listened to all your statements. Each one of them," DeAngelo said in court. "And I'm truly sorry to everyone I have hurt. Thank you, your honor."
Report a correction or typo
Related topics:
californiagolden state killeru.s. & worldabc newsnational
Copyright © 2020 ABC News Internet Ventures.
GOLDEN STATE KILLER