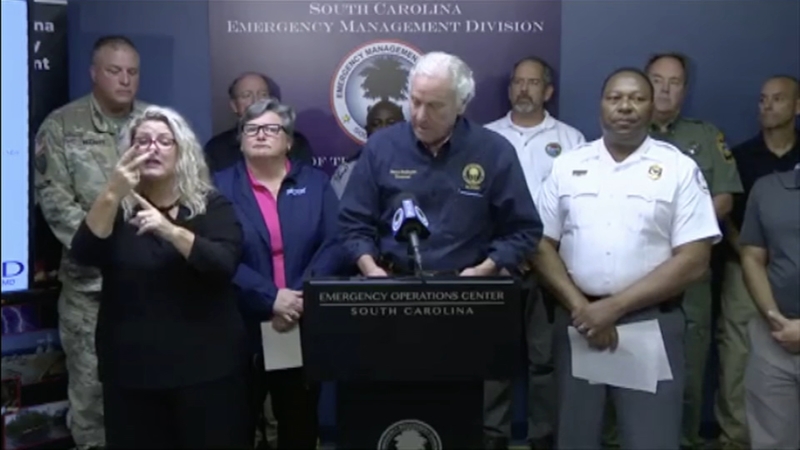 COLUMBIA, S.C. -- Governors of South Carolina and Georgia have ordered a mandatory evacuation of their states' entire coasts as Hurricane Dorian threatens.

In South Carolina, authorities say the order covers approximately 830,000 people, many of whom will be evacuating for the fourth time in four years.

South Carolina Gov. Henry McMaster says he knows some people won't be happy having to leave their home. But he says "we believe we can keep everyone alive."

The National Hurricane Center forecasts the center of Dorian is to stay off shore while paralleling the South Carolina coast starting Wednesday afternoon.

RELATED: What do hurricane categories mean?

But a small error in the forecast could send the eye and strongest winds into the state.

In Georgia, Gov. Brian Kemp has also ordered a mandatory evacuation of the state's Atlantic coast starting at midday Monday.

Kemp tweeted late Sunday that his executive order covers all those located east of the Interstate 95 corridor on Georgia's Atlantic seaboard. It begins at noon EDT Monday as powerful Hurricane Dorian creeps ever closer to the U.S. Southeast.

Dorian marks the third time since 2016 that hurricane evacuations have been ordered for all of coastal Georgia. Roughly 540,000 people live on the state's 100-mile (160-kilometer) coast. Areas to be evacuated include parts of Bryan, Camden, Chatham, Glynn, Liberty, and McIntosh counties.

Kemp added in his tweet that lanes will be reversed on major Interstate 16 starting at 8 a.m. Tuesday to better lead motorists away from the coast.

Before the evacuations ahead of Hurricane Matthew in 2016 and Hurricane Irma in 2017, coastal residents had not been ordered to flee a storm since Hurricane Floyd in 1999. That hurricane ended up missing the state before making landfall in North Carolina.

The only recorded storm that was more powerful was Hurricane Allen in 1980, with 190 mph winds. That storm did not make landfall at the strength.

The cities of Brunswick, Georgia; Charleston, South Carolina; and Wilmington, North Carolina, could all see more than six inches of rain, according to the latest forecast.

PREPARE FOR THE STORM
While it is too early to know the impact Dorian will have, it is never to early to prepare with the essential supplies.