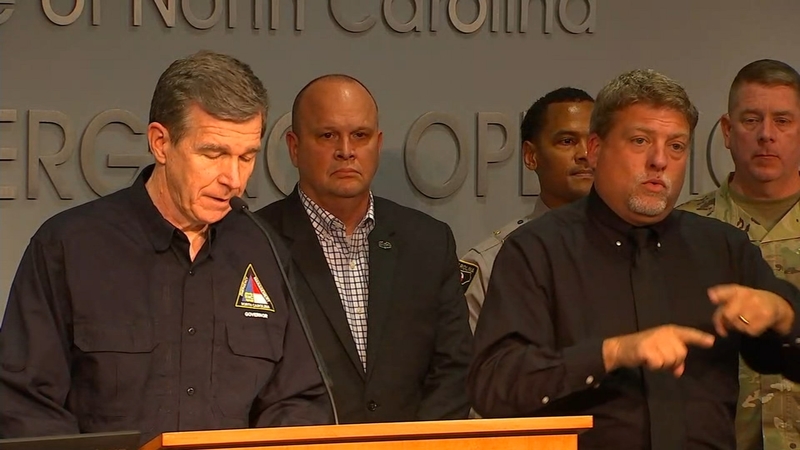 DARE COUNTY, N.C. (WTVD) -- A Hurricane Watch was issued for the entire North Carolina coast Tuesday morning as other evacuations and state of emergencies were issued. Governor Roy Cooper plans to issue a mandatory evacuation of all North Carolina barrier islands on Tuesday and says two large shelters will be organized in the Triangle to help those displaced by Hurricane Dorian.

NC Governor Roy Cooper says they plan to set up two large shelters in the Triangle ahead of Hurricane Dorian. He also plans to evacuate the NC barrier islands today. #abc11 #hurricanedorian pic.twitter.com/YOrkyLPQJi

Cooper issued a mandatory evacuation order for vulnerable coastal areas. The order goes into effect at 8 a.m. Wednesday and applies to barrier islands along the entire coast spanning from the Virginia to South Carolina line.

If local authorities call for earlier evacuations, residents and visitors should follow those directions.

"Please listen to and follow all evacuation orders," Gov. Cooper said. "We have seen the life and death effects of this storm in the Bahamas, and we urge everyone on the islands at the coast to leave."

A state of emergency has been issued for all areas of Dare County including the towns of Duck, Southern Shores, Kitty Hawk, Kill Devil Hills, Nags Head, Manteo and all unincorporated areas including Hatteras Island, Roanoke Island and the Dare mainland.

"I urge you to listen to your local officials," Cooper said. "And if they order an evacuation, please follow their instructions."

Danny Souer, who lives in Knightdale but was visiting family in Carolina Beach, said his family is planning to ride the storm out.

Others heeded the warning from authorities.

"Last night, we're sitting around talking about the pictures of the engagement and stuff and they said, 'Oh we have a mandatory evacuation at noon today.' So we packed up the car this morning and left," said Robert Stabbe of Chapel Hill.

Stabbe and his wife had gone to Savannah for his son's engagement.

He said his son will likely evacuate to their home in Chapel Hill.

The state of emergency includes restrictions on ocean swimming. Everyone must stay out of the water, officials said, as it is unsafe for even the most experienced swimmers.

Those evacuating to areas north of Dare County are encouraged to travel westbound on Highway 64 to Interstate 95.

Evacuating through the rural areas to the west of Dare County will help avoid traffic backups and congestion that may prolong evacuation by traveling northbound through the Hampton Roads portion of Virginia.

Hundreds of state troopers will be monitoring evacuation efforts throughout the affected areas. Cooper says he has activated National Guardsmen to assist with efforts.

Cooper also said he asked President Donald Trump for an emergency declaration to ensure federal funds for disaster relief. Sen. Thom Tillis later said he spoke to Trump on the phone and he president said he will be granting Cooper's emegency declaration and assured Tillis that North Carolina will have the federal government's full resources in response to Dorian.

On Tuesday, Cooper said his request had been granted. Trump tweeted that he would have the declaration signed Tuesday night.

At the request of Senator Thom Tillis, I am getting the North Carolina Emergency Declaration completed and signed tonight. Hope you won’t need it!

"North Carolinians have faced tough storms before and we're taking every precaution to make sure we're prepared. I appreciate the support of our federal partners in making sure our state is ready to respond to whatever Hurricane Dorian brings," Cooper said.

While it is too early to know the impact Dorian will have, it is never to early to prepare with the essential supplies.