'We know it's dangerous': ABC11 shows you the flight into Florence's eye with the USAF Hurricane Hunters 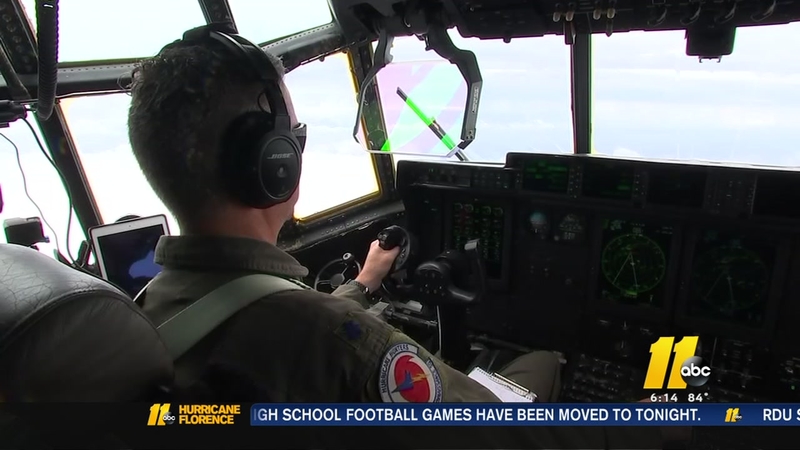 The United States Air Force Reserve's 53rd Weather Reconnaissance Squadron conducted another mission over the Atlantic Ocean on Tuesday, and the ABC11 I-Team was given special access for the flight.

The squadron, nicknamed "Hurricane Hunters," is flying daily into the eye of Hurricane Florence, the Category 2 storm destined to make landfall sometime in the next day or so.

Based in Biloxi, MS, three WC-130J aircraft arrived in the region on Sunday at the request of the National Hurricane Center.

"We're just trying to make it so that there's a more accurate prediction," Maj. Tobi Baker told ABC11. "With our data a lot of times it will increase the accuracy between 35% to 45% percent. If we can decrease it by that much, you're saving property, and strategically putting resources where they need to be."

Over the course of the nearly 9-hour flight, Baker's team of weather officers drop dozens of small canisters, called Dropsondes, which parachute through the eye and contain several instruments to measure data that a satellite cannot: wind speed, wind direction, intensity, pressure, and temperature, among other things.

The clear blue sky is indeed the eye of the storm. Tough to capture on camera what you see outside the window - the curved clouds, the different colors. Just an extraordinary flight. @ABC11_WTVD @ABCWorldNews @ABC @53rdWRS #HurricanceFlorence pic.twitter.com/vW8riwZjYE

"Every ten minutes is like a text message sent to the National Hurricane Center," Maj. Baker adds. "So they're collecting information real time."

At the other end of the aircraft, a separate crew from the U.S. Navy dropped larger instruments that fall directly to the ocean to gauge the water temperature.

"The reason we do this is so that we can narrow that cone - the cone of confusion," Lt. Col. Jerry Rutland, the flight's pilot, tells ABC11 as he refers to the range of projected paths of the hurricane. "Sometimes a lot of people in a mass evacuation, some people die while they're evacuating. So if we can keep fewer people evacuating and saving communities' money, that's a win-win."
Report a correction or typo
Related topics:
ncsafetyhurricane florencehurricane
Copyright © 2022 WTVD-TV. All Rights Reserved.
TOP STORIES
Court papers show how investigators linked suspect in Hedgepeth murder
As last-ditch effort, Cary tapas bar launches fundraiser to stay open
Supreme Court to hear challenge to race in college admissions
George Floyd's family reacts as civil rights trial begins
Eateries hope for community support during Triangle Restaurant Week
No charges for Johnston County deputy who shot drug suspect in wrist
Mental health providers of color see influx of patients
Show More
LATEST: Next steps in fight against COVID-19
Getting paid on Venmo or Cash App? New tax rule might apply to you
Alex Murdaugh hit with more charges connected to 4 new clients
8,500 troops placed on heightened alert for European deployment
Cruise ship takes passengers to Bahamas to avoid Florida warrant
More TOP STORIES News