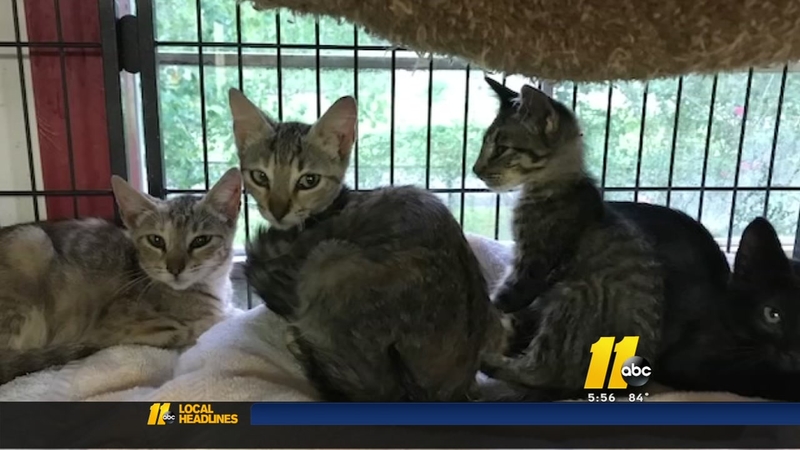 RALEIGH, North Carolina (WTVD) -- The local effort to raise money for human victims of Hurricane Harvey has been underway for a week now.

Now animal lovers are also gearing up to help domestic animals orphaned by the storm.

One local non-profit called Purr Partners has made it its mission to find an unheralded rescue group in Texas that is off the radar and not likely to get funds from any other source.

"We decided to reach out to some of the shelters, small shelters, not the big ones, that were probably going to be the ones that got little publicity and little help," Lawanna Johnson told ABC11.

Johnson and other members of the group identified a no-kill shelter called Wags to Whiskers in the Houston area.

Over just the past couple of days, Purr Partners have raised $1,500 on their website and Facebook page alone.

Purr Partners rescues cats and kittens from area shelters that have a high kill rate. Members foster the felines and help find them permanent homes.

So the group's initial focus was on felines in Texas.

Johnson noted, "These cats are going to be pouring in for the next several months as they are found. And cats, much more so than dogs, when you get an incident like this they hide. So sometimes if they're ever found at all they're found much later and they come in in bad shape."

In the effort to help Wags to Whiskers in Texas they are also partnering with three local businesses to collect not just money but supplies for dogs as well as cats and other types of pets.

Those businesses, North Wake Animal Hospital, Capital Automotive Group, and Carolina Collision Centers, will be collecting supplies and monetary donations through September 20. The supplies will be loaded on a truck and driven to Texas. You can find a list of supplies needed here at the Purr Partners website.