Erwin woman thankful to survive despite losing nearly all in flood 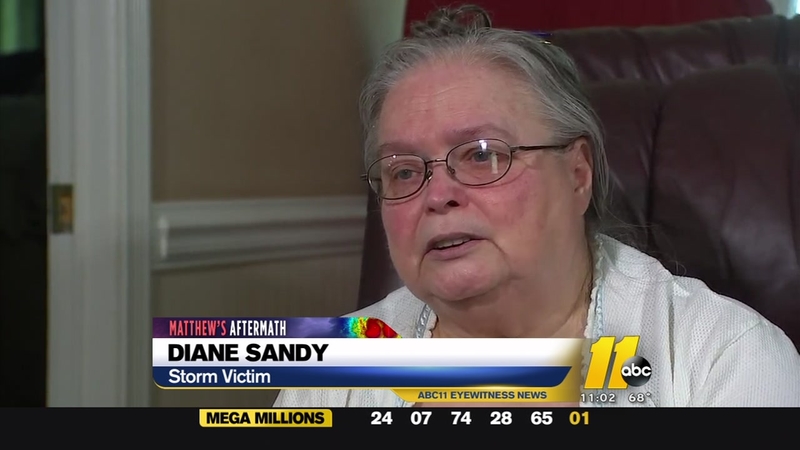 She lost nearly all, but Harnett County woman grateful for rescue from floodwaters

ERWIN, NC (WTVD) -- The gravity of having to be rescued from her home during Hurricane Matthew still brings Diane Sandy to tears.

She said the water was up to her shoulders inside of her home when rescue crews were able to pull her into a boat.

Sandy has lived in the mobile home on Avents Tenants Road in Erwin since 2008. She said that part of Harnett County is no stranger to flooding, but water usually doesn't get past her front steps.

"It's my fault, I didn't get out sooner, but I just kept thinking, you never want to think the worst," Sandy said. "I just thought, well it's going to do like it usually does; it's going to get up and it's going to start receding. This time it didn't."

Not much is salvageable in Diane Sandy's home after the storm, though she was able to secure and later save one prized possession

She said she started to get scared when water started coming in under her front door.

"It was just rushing in there just like you turn on the bathtub," Sandy said. "Within 20 minutes, it was waist deep."

She stayed on the phone with 911 until her phone went dead.

She said when she got in the rescue boat, she was cold from the water and was thankful that her daughter was already standing at the edge of the floodwaters waiting to take her home.

"I was really lucky. I was lucky that I didn't drown," Sandy said. "If they had been just a few minutes longer, I wouldn't be here."

Diane Sandy's photos she had in her purse when rescue crews pulled her from flooding home #AfterMatthew #ABC11 pic.twitter.com/DJ9PlpCjWc

Sandy got out with just the clothes on her back, but she was able to secure at least one item she didn't want the water to ruin. It was a portrait of all four of her children. It was the last one picture of all four of them before she lost her oldest son. The anniversary of his burial was on the same day Hurricane Matthew hit.

"It happened on October the 8th, and I was already upset because that was 35 years to the day that I buried my oldest son," Sandy said through tears. She said he passed away from severe burns.

Diane Sandy with the last portrait of all four of her children. The oldest one (with the dark hair) died 35 years ago. Hurricane Matthew hit on the anniversary of his funeral.

When she returned with family a few days later after the water had gone down, she was thankful to learn that water had not reached where she hid the portrait and it survived.

Her son brought it to her but really didn't want her to see what else the floodwaters had left behind,

A wall of Diane Sandy's home was knocked out by the storm.

"He says 'Mama don't get out of the car.' He told my daughter not to let me get out. He said on the backside the whole wall was out," said Sandy.

She said at one point, the floodwaters filled almost the entire mobile home from floor to ceiling. There is a huge wall on the back of the home. Looking through you can see furniture and clothing tossed around, torn insulation, and mud everywhere. The home was ripped off of its porch, which could be seen sitting across the yard.

Diane Sandy's mobile home was ripped off its porch.

"My daughter went through there and got tall plastic garbage bag full of clothes that were muddy and dirty from the slime on the creek bottom. She washed those, so I've got those," Sandy said.

Sandy has been staying with her daughter while looking for a new place to live. While she doesn't have many material things anymore, she said she's thankful she has what she has, knowing she almost didn't survive.

"There are a lot of people I seen on TV that lost a whole lot more than I did," she said.