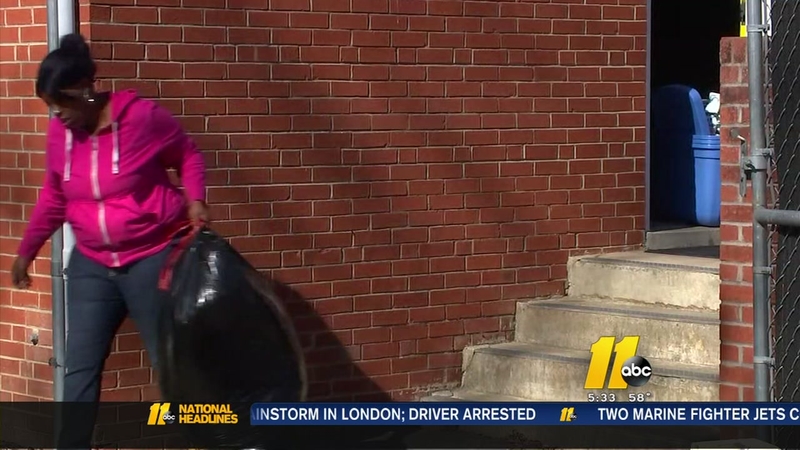 RALEIGH (WTVD) -- The only remaining shelter for Hurricane Matthew victims in Goldsboro has officially closed its doors.

The Red Cross shelter at School Street School in the 500 block of Elm Street was no longer in operation effective at noon Thursday. A week and a half ago, more than 60 people called the shelter their temporary home.

He had been staying at the shelter for a while. Red Cross staffers said Tyson was "special" because he "bounced around from place to place."

Officials said Tyson would wake up for work around 6 a.m., bike to his job, work a 12-hour shift, and bike back to the shelter, all in good spirits.

"I'm working right now and trying to get the ball rolling to get my own spot," Tyson said.

Staff sorted out used clothes, toys, and other items as the shelter began to clean up and clean out.

The remaining in-kind donations will be sent to non-profit groups or other Red Cross shelters that are in need. The blankets and cots were packed in a moving truck and sent to a location where they will be washed, sanitized, and reused.

A portable shower and generator were also among the items being hauled away.

Red Cross official Kristen Binau said she is glad the few remaining people were able to get assistance.

"Some of them were just waiting on that final bit of information and they're just filled with so much hope as they're heading into their new location or their new home," Binau said. "What's also interesting after Hurricane Matthew is there's been some really powerful stories about folks that have come out to help, folks that have been ready to help their neighbors get back to where they need to be. It's bittersweet, but it's one of those things that we're really excited about the most."

Tyson said it was difficult to watch people leave and each night he would return.

"I thought everybody left me," Tyson said. "We still got a few people in the background and everything is going pretty swell, pretty good."