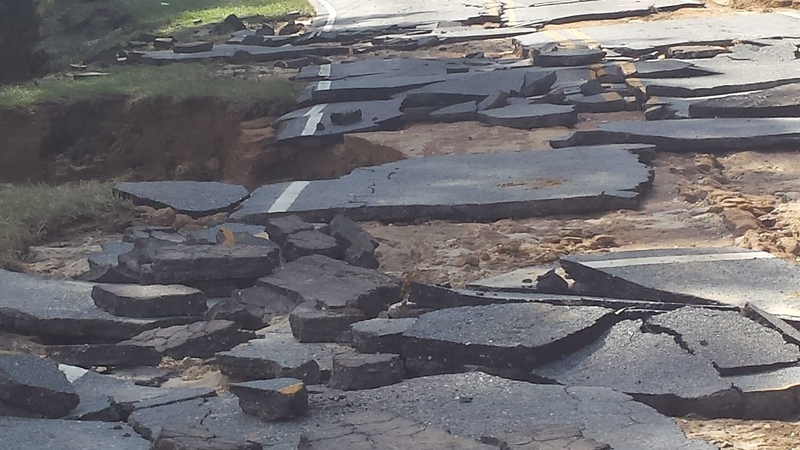 RALEIGH (WTVD) -- Hundreds of roads are still closed three weeks after Hurricane Matthew and emergency first responders are having to readjust their routes.

At the height of the storm, a total of 620 roads were closed. That number has been cut almost in half. 320 roads are still shut down as of Friday.

Some roads are still under water and others are washed out.

Rogers Road in Wake Forest is closed to drivers. The NC DOT expects to reopen it before Thanksgiving. A new pipe is supposed to be delivered by the end of next week.

The DOT is going to have to send divers down in some cases to make repairs because engineers can't see the damage to access it.

"The culvert under the road is 15 to 29 feet down," said NCDOT spokesperson Steve Abbott. "Instead of digging up the whole thing, divers can go in and see 'Hey, it's damaged here.'"

"I think we're really lucky here. Certainly, we know our neighborhoods not very far away have sustained so many ongoing problems as a result of the hurricane," said Wake County EMS Assistant Chief Jeff Hammerstein.

Wake County EMS showed ABC11 how they are working through the damage. There are four closures in Wake County.

Staff can go into a map and mark the spots down, so responders can find the fastest way around the road block. Crews additionally can be placed near trouble spots to maximize response time.

"If we know we have a significant road closure, we make move a crew to a different area temporarily," said Hammerstein.

Wake says there haven't been any issues so far.

"We can still get to everybody we need to quickly," said Hammerstein.

Just the same in Wayne County, where homes were swallowed by water and there was significant flooding, EMS says they've been fine reaching patients.

The DOT says it'll take months and an unknown amount of money before every road is fixed.

"(It's) just because of the sheer magnitude and the sheer number," said Abbott. "We have to order culverts. They don't sit in the back of a yard. They have to be custom made and there's not a lot of companies that make those and they're getting requests from us, South Carolina, and other states."