Canes are ready to build on postseason success 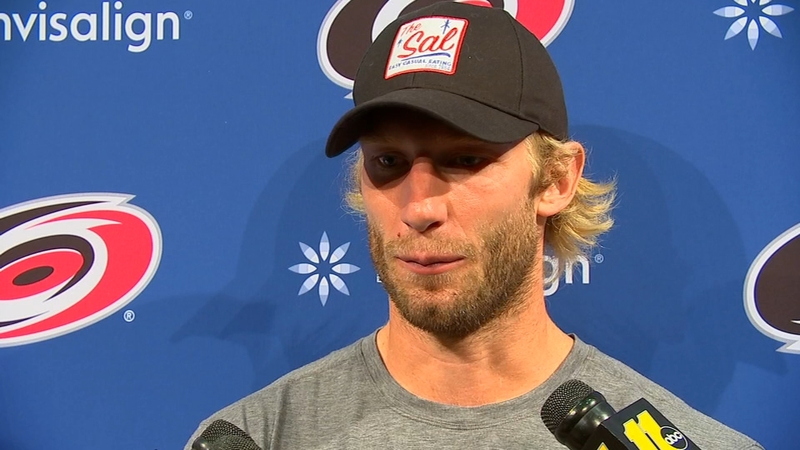 Canes ready to build on success

RALEIGH, N.C. (WTVD) -- While Justin Williams' announcement that he was "stepping away" from the NHL, perhaps permanently, caught some by surprise earlier this week, Rod Brind'Amour was not among them.

The Hurricanes second-year head coach had made it abundantly clear following last year's playoff run that he hoped his buddy and team captain would be back for one more go this year, but admitted today that he's known for a while this summer that wasn't going to happen.

Even a recent golf outing wasn't so much an effort to sway Williams, rather perhaps one last check-in to make sure Williams was still in the same place mentally.

Here’s Roddy on the timeline of Justin’s decision and that (not so) fateful round of golf with his buddy pic.twitter.com/dQdZEIJ25z

Replacing the leadership, and scoring of Williams is certainly no easy feat, but Jordan Staal said Wednesday that while Williams was certainly the captain for a reason, he was far from the only leader in the room.

There are obvious candidates to step up in Justin's absence. Jordan himself maybe first among them. When I pressed him about the failure that was the two-captain system with he and Justin Faulk two seasons ago, Staal said winning makes a lot of things better. He wouldn't admit to laboring in that system, even if both he and Faulk even more so seemed happy to be free of the burden last year. Names like Slavin, Martinook and even Aho can't be ignored either.

For his part, Brind'Amour said a two-captain system won't be under consideration. He's not sure which direction he's headed and said he'll take his time before making a decision.

To no one's surprise, there is great optimism coming back after last year's return to the playoffs and subsequent run to the conference finals. When I asked Martinook why this team in his opinion was built to maintain success rather than flash in the pan as previous Canes teams have done, he looked almost incredulous.

"Look at our whole team -- we've got two guys over 30? When you add (Erik) Haula, who's a rocketship and (Ryan) Dzingel, who can skate like the wind, that's kind of what our team was based on last year...then just transitioning and bringing what we learned and gained from last year, it's built for success for many years."

On paper, it's hard to disagree. Goaltending is always a mystery, though there is certainly much more belief in Petr Mrazek now than there was last year. Brind'Amour said last year was essentially a dice roll that turned out. Now they think they know what they've got in Mrazek and to a lesser extent, veteran backup James Reimer.
Part of the continued evolution of the team will of course be the development of its youth. Andrei Svechnikov said he worked on everything during his summer, firm in the belief that he has room to improve in every facet of his game. With that attitude and his skill set, a massive leap forward is not to hard to imagine. Svechnikov said he's taken boxing lessons the last few years. When I asked who he believed to be the best pound for pound boxer in the world, he deadpanned "Ovi".

Svech has taken boxing lessons the last several years so I asked who he thinks the best pound for pound boxer in the world is — expected Lomachenko or something.

Instead - w/o skipping a beat - he says OVI

The Russian was also visibly struggling with the return to Raleigh humidity. Even inside the bowels of PNC Arena, he was sweating pretty profusely.

One other funny moment -- Jordan Martinook reflecting on the "lower-body injury" that had him barely functional during last year's playoff run. Martinook said Wednesday that he's had his "downstairs" fixed. We can all only hope to have fully functioning "downstairs".

Jordan Martinook on having to get his “downstairs” fixed after the playoffs 😂😂 pic.twitter.com/Bt5G5bXxtK