Southbound I-95 reopens after 3 crashes in Johnston Co. 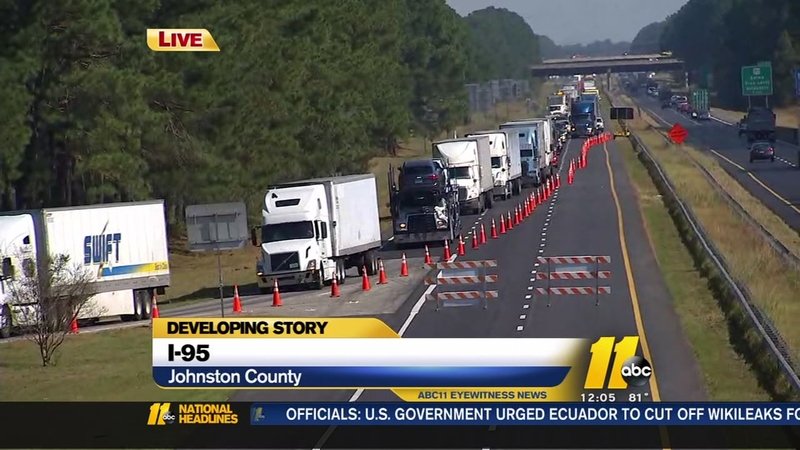 Southbound I-95 still closed after string of crashes

An evacuation order was also lifted early Thursday morning for Johnston Community College, Carolina Premium Outlets, and nearby homes because of the toxic fumes caused by the wreck.

Johnston County Schools opened on a two-hour delay Thursday due to lingering issues. All town offices in Smithfield, including Town Hall and Smithfield Recreation and Aquatic Center are now open.

Multiple crashes on I-95 shut down stretch of I-95, leave at least two people dead.

The Wednesday afternoon crash prompted Johnston County officials to open shelters at Cleveland High School and Princeton High School to house residents within a 3-mile radius of the wreck site. Emergency services said there were about 40 people who sought shelter.

The North Carolina Highway Patrol said an RV hit the back of a tractor trailer possibly hauling some type of corrosive chemical just after 1:30 p.m., and then both vehicles ignited.

"I saw a giant flame come up then smoke," said Sam Walter, an eyewitness to the crash.

They were like "come on there's a big chemical cloud out here from the accident," Clark recalled.

Johnston County officials told hospitals, assisted living facilities and other facilities with special populations to remain at their facility and shut down all air handlers, close all exterior vents, windows and doors due to fumes from the wreckage.

Smoke from the fire is seen from a nearby road.

Residents in the area were also told not to go outside, and that all pets should be brought inside.

The first accident happened around 1 p.m. and involved an 18-wheeler that ran off the road and into a guard rail. The driver was pinned, and emergency workers had to cut him out of the cab.

Two people in the RV were killed, state troopers said. A third person was rushed to a hospital.