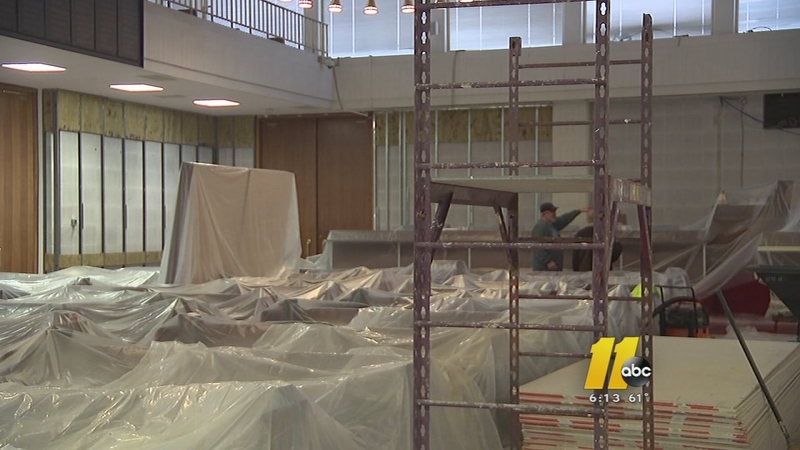 RALEIGH (WTVD) -- A sudden makeover at the North Carolina Legislative Building in downtown Raleigh has some Democrats upset. They say taxpayer money is being wasted, but Republicans say the upgrades are needed.

Before Republican House Speaker Thom Tillis left Raleigh to win his U.S. Senate race, he signed off on a major renovation plan for the North Carolina House chamber.

The 51-year-old chamber is now in the middle of a two-month-long construction project.

"This building is so significant to the history of North Carolina," Rep. Grier Martin told ABC11 as we toured the construction zone Tuesday.

Martin is leading the outrage from Democrats who say they were kept in the dark about the makeover to what he considers an architecturally significant symbol of North Carolina history.

"To see [the chamber] change so significantly without consulting everyone in the building is troubling," Martin said.

On Twitter, Martin called the project a shameful waste of taxpayer money.

"You can see where it's heading," Martin said as he stood over his desk on the House floor, now covered in plastic sheeting to protect against construction dust. "All the really important detail from here down is going to be gone."

The I-Team left messages for Rep. Moore at his legislative and business offices Tuesday. Our calls were not returned in time for publishing.

Martin said the project came as a total surprise to Democrats. He's seen no blueprints, renderings, or cost estimates.

The interim head of Legislative Services at the General Assembly, Kory Goldsmith, confirmed to the I-Team that the project includes major dry walling. Six sets of doors leading into the House will be walled over. New electrical outlets and data ports will be added, and the curtain behind the House Speaker's desk will be removed and replaced with paneling. The estimated price tag is $125,000.

"Was this the best use of taxpayer dollars when revenues are down," Martin asked. "Other buildings in state government are in much worse repair than this. Would [the money] have been better spent there? I think so."

Tillis, who controls the purse strings on projects like these, could not be reached for comment Tuesday. A spokesperson did not return our call for comment.

The renovations are expected to wrap up just in time for new members' orientation which is set to begin Jan. 2.