WTVD
By STEVE DANIELS and SILVIA GAMBARDELLA
RALEIGH (WTVD) -- An I-Team investigation found your family could be injured by recalled products that might still be in your home.

In a collaborative effort with investigative units at ABC News and other network affiliates around the country, the I-Team examined how very few people hear about product recalls and why so many recalled products are unaccounted for.

Jennifer Irwin lived through the nightmare all parents fear. Three years ago, her six-month-old son, Ayden strangled himself in their home near Charleston. He wrapped himself in an electrical cord attached to a video baby monitor.

"They showed us his heart on the ultrasound and they couldn't get it to beat," the mother recalled sadly.

Irwin was not aware of the danger posed by the monitor cord made by Summer Infant. She never saw the safety alert the Consumer Product Safety Commission released the year before Ayden died. The alert said seven babies had died from corded baby monitors.

"I was angry. I mean, as a first time parent, you do everything the instructions say. I did what the instructions said. I mounted it like they told me to mount it. I relied on what they said to keep my child safe," she explained. "I spent all this money to keep him safe, and in the end, it ended up killing him!"

After Ayden's death, the monitors were recalled to provide new warning labels and instructions for the nearly two million monitors still in homes or stores. The company urged parents to place the label on the cord and keep the cord 3 feet away from a child.

Tens of thousands of products are recalled every year. But, as few as 5 percent of them are accounted for. Up to 95 percent of products remain in homes across the country. The reason? The Consumer Product Safety Commission says you may not hear about the recall or be notified by the company.

Nancy Cowles of Kids in Danger doesn't think the recall system is effective.

"The recall system does not work," Cowles said. "95 percent are still out there. Maybe some were thrown away. Maybe some are not still in use. But we have to believe the vast majority of them are still being used - in homes, in childcare, by people who aren't aware that they're using a potentially dangerous or deadly product with their children.

The Consumer Product Safety Commission regulates products nationwide. It says companies don't spend nearly as much time advertising recalls as they do selling their products.

But consumer advocates don't think the CPSC has enough power over companies.

"Well, the whole recall industry is dependent on what we call reverse marketing. Being able to go out and find the products that you sold that are defective and bring them back in," Jack Gillis, spokesperson for the Consumer Federation of America, said.

"Often times, you see recall notices on the business pages of newspapers. What consumers read the business pages in the newspapers? And yet the company has completed its obligation by doing that," he said with frustration.
Not only is it tough for consumers to keep up with recalls, but recalled products are also being re-sold online.

The I-Team found dozens of recalled children's products on Craigslist. We even found a baby monitor like the one involved in 6-month-old Ayden's death.

Kira Mooney didn't know about the recall when she decided to sell her baby monitor on Craigslist to one of our ABC colleagues.

"I feel bad for selling them. And I guess if they are really recalled, they shouldn't be used. Just because it could be a fire hazard, and it could be dangerous for the children," Mooney said with some guilt in her voice.
No one knows that better than a mother who has lost a child to a recalled product.

"People just go on there to sell things," Jennifer Irwin exclaimed. "I mean a lot of people don't know his story. A lot of people don't know what happened. There isn't a day that goes by that I don't miss him. He brought so much joy to our lives, and I was so blessed to have him in the little time we did have him," she said as she choked on tears.

To see if a product you've purchased has been recalled, go to www.SaferProducts.gov.

Over the weekend, Craigslist posted a letter outlining new steps it is taking to prevent the sale of recalled products, many of which can be deadly to children.

Now, craigslist has programmed its system to stop one recalled baby product, the "Nap Nanny," from being posted for sale on its website.

That's not enough according to Kaye. He has issued a challenge to Craigslist to make the site safer for consumers. 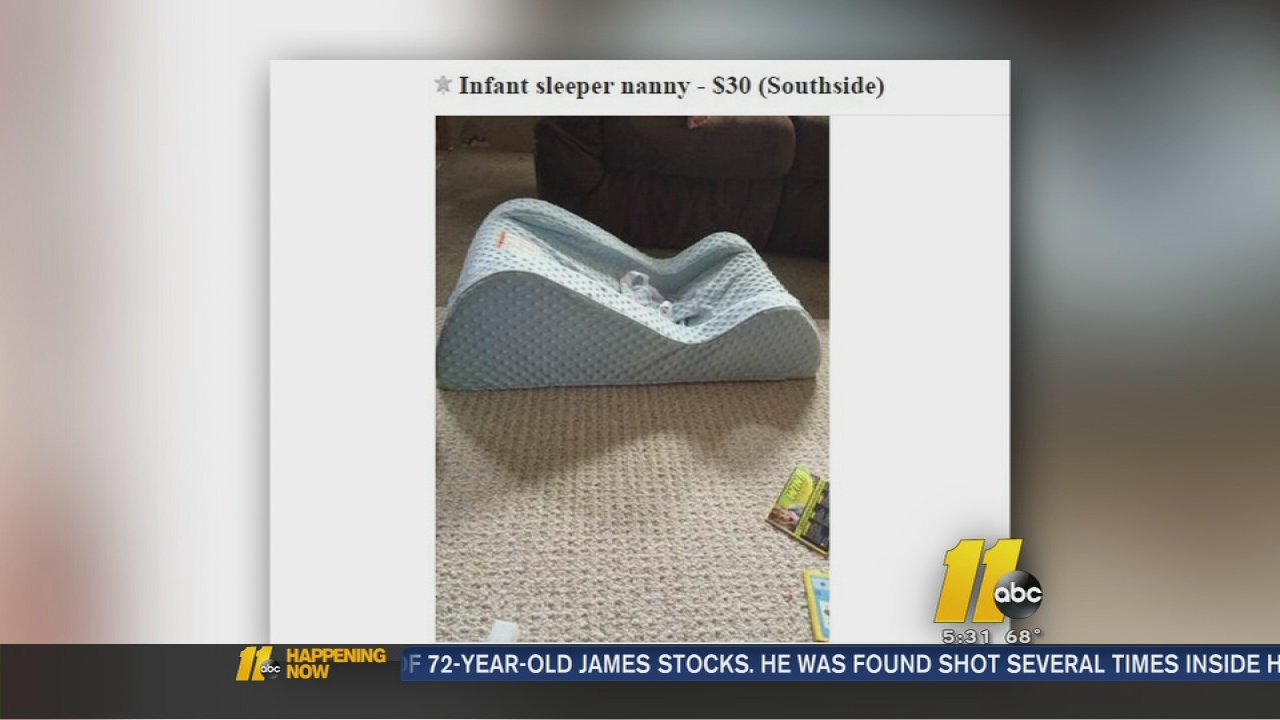