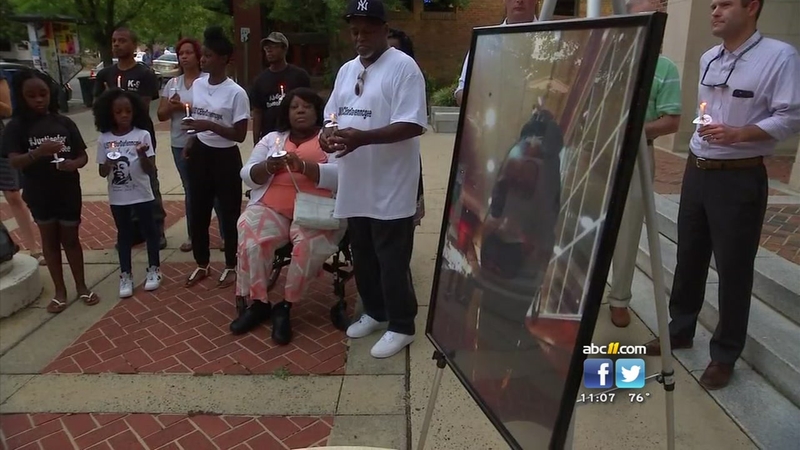 Vigil held for victims in fatal crash on I-85

CHAPEL HILL, N.C. (WTVD) -- One year ago Tuesday, three lives were lost in a crash on I-85. To mark the somber anniversary, loved ones of one of the victims hosted an intimate candlelight vigil in front of the courthouse on E. Franklin Street.

"The reason why we gather today is because some individuals choose to drink and get behind the wheel," said Deseante Jones as she addressed the crowd at the podium. Her mother, Darlene McGee was one of the three people killed on July 19, 2015.

Last year in the overnight hours, the Highway Patrol responded to a wrong way crash on I-85, near exit 163. They say a driver of Jeep was driving in the wrong direction in the southbound lane when he crashed into another vehicle.

McGee's family said the group was returning from a memorial for McGee's mother in Virginia.

"She had her mother's urn in the car," said Alex Faison, McGee's cousin.

Investigators say the driver of the Jeep was UNC student, Chandler Kania, who was just 20 years old at the time. They say he purchased and consumed alcohol before driving the wrong way down I-85.

In court last year, prosecutors said Kania gave troopers someone else's ID when he was pulled over that showed he was 21 years old.

Orange County grand jury indicted Kania, who is from Asheboro, on three second-degree murder charges, three counts of felony death by a motor vehicle and one count of felony serious injury by a motor vehicle. He is also charged with obtaining alcohol with a false driver's license.

He was released from jail after his family posted a $1 million bond.

"I try not to let my grief overwhelm me, but at times, it's hard to deal with," said Jones.

"The reason we're here tonight is because someone chose to drink & get behind the wheel"- daughter of Darlene McGee pic.twitter.com/OZSg0KiXZo

She said the main thing getting her through this are her own children and the warm memory of her mother's smile.

Many in the crowd wore #JusticeForDarlene T-shirts.

"We're here, and we expect justice for this family," said Faison, referring to Kania's tentative trial date of October 3rd.

Also at the vigil were representatives of Mothers Against Drunk Driving and members of law enforcement.