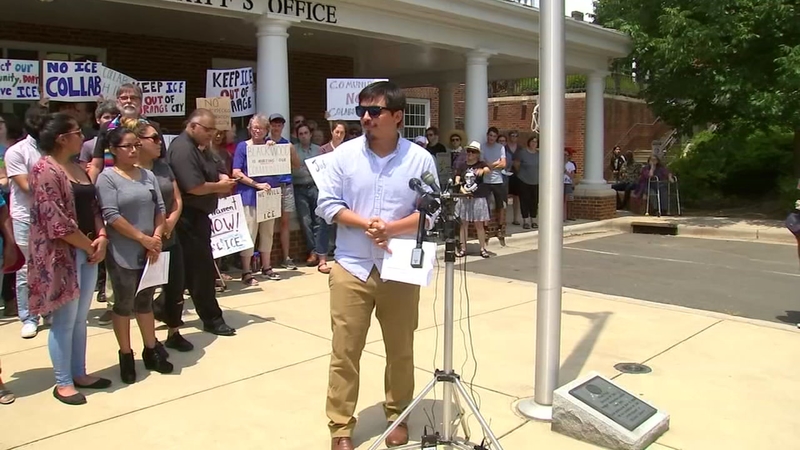 HILLSBOROUGH, N.C. (WTVD) -- A group of people rallied against the Orange County Sheriff's Office on Friday, accusing them of cooperating with U.S. Immigration and Customs Enforcement.

The protest came after Jocsan Cornejo was taken by ICE out of Orange County Jail on July 18.

Protesters raised concerns that despite Sheriff Charles S. Blackwood's claim of non-collaboration with ICE, he is still allowing ICE to take detainees into custody without a judicial warrant.

At Friday's rally, which happened at the sheriff's office on Margaret Lane around 12:30 p.m., protesters made demands that the Orange County Sheriff require ICE to obtain a judicial warrant to take people from the jail.
The rally was backed by Siembra NC and Apoyo--Centro para la Comunidad.

"Our Sheriff must take greater steps to honor his promise and stop ANY and ALL voluntary collaboration with ICE, and join Mecklenburg, Durham, Guilford, Forsyth, Buncombe and other counties in implementing a written judicial warrant policy at the jail," Siembra NC said in a Facebook post.

At the time Cornejo was taken by ICE, he was awaiting trial on state charges for DWI, driving while license revoked (not impaired revocation), exceeding posted speed, assault on a female, assault on a child under 12 and battery of an unborn child.

According to the Orange County Sheriff's Office, Cornejo originally came into the custody of Orange County on June 23. At that time, the county submitted his fingerprints which triggered an automatic inquiry of his immigration status.

She said Cornejo did push her but claimed that the other charges against him were made up.

A statement from the sheriff's office said, in part:

OCDC received a detainer request for Mr. Cornejo on June 23 from a California office. On June 25, we received a second detainer request from the Cary, NC office. Both detainer requests asked us to hold Mr. Cornejo for up to 48 hours after our authority to detain him would otherwise end. As per our usual practice, detention center staff filed a copy in Cornejo's inmate shuck. He remained detained in our facility because no one posted his bond and because his state charges were not yet resolved.
As routinely happens, on the morning of July 18, Immigration and Customs Enforcement (ICE) called to inquire about inmates for whom they had submitted detainer requests, including a request for information about Cornejo. Later, the OCDC Administrator placed a call to DHS to clarify that Cornejo did indeed have a bond reduction hearing scheduled that afternoon. During that communication, DHS verbally renewed the detainer request, asking OCDC to retain custody over him for 24 - 48 hours. DHS was told the detention center would not hold him if he became eligible for release. DHS arrived prior to Cornejo's bond hearing and took him into custody. When the hearing concluded, the district court judge ordered Cornejo's bond unsecured, and the clerk file stamped the order at 4:06 pm. At that time, Cornejo had already been in ICE's custody for approximately half an hour.
The Orange County Sheriff's Office has always complied with local, state and federal law. In addition, we cooperate with local, state, and federal enforcement agencies when working together furthers the safety of those we are entrusted to protect. Our cooperation with ICE is limited to the sharing of publicly available information.

"Even people in the United States without documentation come under the protection of the U.S. Constitution," said Blackwood. "If ICE does not come before the expiration of the period during which we have the legal authority to hold someone in custody, the 4th Amendment of the US Constitution, which was made applicable to the states by the 14th Amendment, requires the person's release. Violating a person's constitutional rights is not something we do. A detainer request is not an order issued by a federal judicial officer; it is merely a request which can be honored or not at the discretion of a sheriff. As a matter of policy, our agency does not honor detainer requests."
Report a correction or typo
Related topics:
community & eventsorange countyhillsboroughorange county newsprotestdeportationrallyiceimmigration
Copyright © 2022 WTVD-TV. All Rights Reserved.
RALLY
Trump to hold July rally in Greensboro
Local Ukrainian community hold rally in support of war-torn country
Hundreds march on Raleigh to protest potential reversal of Roe v Wade
One Wake walks to polls, advocates for affordable housing in Cary
TOP STORIES
Russia's claim of Mariupol's capture fuels concern for POWs
Man charged in Hope Mills double murder
Some peanut butter recalled for potential salmonella
Smith, Raanta, Hurricanes top Rangers for 2-0 series lead
First formula flights from Europe to arrive this weekend
1 person in hospital after shooting overnight in Raleigh
Dog battles mountain lion to save owner's life
Show More
'Absolutely terrified' teen boy dies hours after 'sextortion' scam
Parents share mixed reactions over plans for boosters for children
Wake Schools bus driver charged with driving bus while impaired
Fayetteville PD on track to full staffing; what about Durham, Raleigh?
Mail delays blamed on dog, owner claims case of mistaken identity
More TOP STORIES News