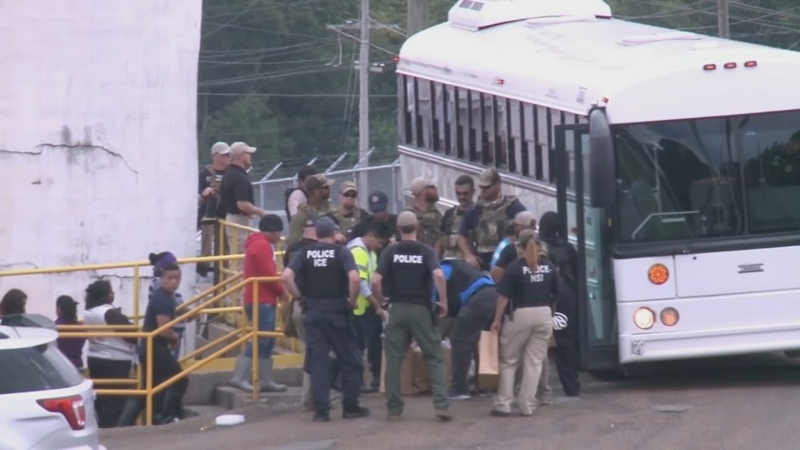 CHICAGO -- Federal immigration agents will end mass workplace arrests of immigrant employees suspected of living in the U.S. without legal permission, according to a memo issued Tuesday by Homeland Security Secretary Alejandro Mayorkas.

Instead, the focus will shift to pursuing "unscrupulous employers who exploit the vulnerability of undocumented workers" and emphasize fighting worker abuse including paying substandard wages, unsafe working conditions and human trafficking.

The three-page memo directs the heads of Immigration and Customs Enforcement, Customs and Border Protection and Citizenship and Immigration Services to draw up a plan within two months to increase employer penalties, encourage workers to report unscrupulous practices without fear and coordinate with other agencies, such as the Department of Labor.

Mass worksite raids were common under former President Donald Trump, including a 2019 operation targeting Mississippi chicken plants, the largest such operation in over a decade. Trump and other Republican presidents defended raids as strong deterrents against illegal immigration, while workers groups called them unfair and discriminatory. For instance, most of the 680 workers arrested at chicken plants run by companies including Illinois-based Koch Foods were Latino.

"The deployment of mass worksite operations, sometimes resulting in the simultaneous arrest of hundreds of workers, was not focused on the most pernicious aspect of our country's unauthorized employment challenge: exploitative employers," Mayorkas wrote. "These highly visible operations misallocated enforcement resources while chilling, and even serving as a tool of retaliation for, worker cooperation in workplace standards investigations."

Along with ending mass worksite arrests, Mayorkas said immigration authorities should also immediately start using "prosecutorial discretion" when it comes to encouraging workers to speak up about workplace exploitation and preventing employers from using retaliatory threats of deportation.
Workers rights groups applauded the move, saying immigrant workers, particularly those without legal permission to live in the U.S., are especially vulnerable. Industries such as meatpacking and chicken processing are particularly reliant on immigrant labor for backbreaking work often set in rural areas with limited access to attorneys.

During the initial weeks of the pandemic, Trump ordered meatpacking plants to remain open amid concerns about the nation's food supply, even as COVID-19 outbreaks were closing plants.

"It is long past time for DHS to stop enabling employers who use the threat of deportation as a tool to facilitate exploitation and evade accountability," Nadia Marin-Molina an executive director of the National Day Laborer Organizing Network said in a statement. "Immigrant workers kept the lights on in this country during a pandemic, and they were essentially told by the government they should work to death without basic rights so that others could live."

Cirila Marin's family remains separated. She's here in Raleigh raising seven sons all alone. Her husband, Mauricio Hernandez, was deported to Mexico in 2019 after a random traffic stop in Durham.

"He thought it was state police and they asked him for his license and registration. And it wasn't until the end that they asked for his (immigration) papers," Marin recalled about that day her husband was stopped by an unmarked pick-up truck.

It was federal agents from ICE asking for immigration papers he didn't have. After eight months in a detention center, Hernandez was deported.

"It's been a really difficult situation to manage," Marin said.

Immigration deportation raids increased around the country under the Trump administration, including North Carolina. Raids in February 2019 resulted in 200 arrests across the state. One of the 2019 raids happened at Bear Creek Arsenal, a gun manufacturer in Sanford. 30 undocumented immigrants were arrested that day.

"We ended up working with 30 families that were impacted by the raid," said Ilana Dubester, executive director of nonprofit Hispanic Liaison, which helped secure legal help for many of those detained in Moore County -- preventing deportation for 17.