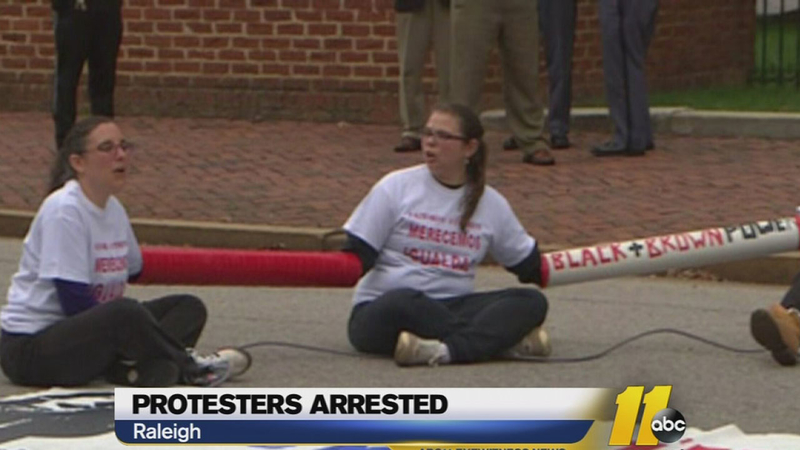 RALEIGH (WTVD) -- Six demonstrators were arrested for blocking traffic after protesters chained themselves together in front of the North Carolina Governor's mansion Thursday.

"The immigrant community is waking up," said Carmen Rodriguez, one of the protesters who was chained together, in a statement put out by the group Southeast Immigrant Rights Network - or SEIRN.

Rodriguez said she is an undocumented mother of three US Citizen children who has lived and worked in Raleigh for over ten years. "We are losing our fear to raise our voices and confront this racism, face to face," she said.

The six protesters chained together in the street unfurled a banner that read "stop the hate we make America great". They were joined by about 100 protesters on a nearby sidewalk.

Police used power tools to cut the protesters apart before arresting them.

RELEASED: The 6 protestors arrested in tonight's traffic-stopping demonstration outside Guv's mansion out of jail pic.twitter.com/4N8V33EmN4

Six demonstrators, arrested for blocking traffic in front of the governor's mansion have been released from jail.
Protestors say they will continue to fight a controversial new law.