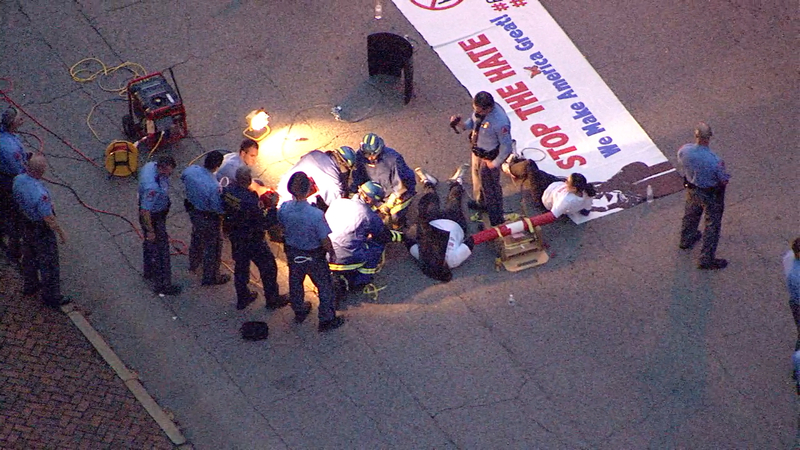 RALEIGH (WTVD) -- The six protesters that staged a disruptive protest outside the Governor's mansion Thursday are all out of jail and are defending their actions.

"We feel like we need to make a strong statement to Pat McCrory," said David Salazar. "We've been trying to get up with him to talk, we've been up there in front of the mansion protesting for the past couple weeks."

Salazar and three others arrested Thursday are naturalized U.S. citizens. Illiana Santillan was with Salazar during the protest.

"We were outside of the mansion for a month," said Santillan. "Prior to that, we were calling, leaving messages in English and Spanish, sending emails, and still we got no direct acknowledgement from him. To me that was very hurtful."

But asked what worried them most about the new law, they had different answers.

For Salazar, a U.S. citizen since 2008, it's the new restrictions on the kinds of identification available to undocumented workers.

"The main thing is because all the families that are struggling to get the type of identification to go pick up medicine from pharmacy or register their kids in school or anything like that. This bill is going to change a lot of their lives for the bad and not for the good."

Angeline Echeverria, who was born in the United States, worries about families being broken up. "We know that most immigrants in North Carolina are living in mixed-status families," she said. "They have relationships with neighbors who were born here and grew up here and are contributing to our economy and our life here."

Nayely Perez, a naturalized U.S. citizen, is worried about the new law spreading to other states.

The only undocumented person arrested was Carmen Rodriguez. She crossed the border illegally in 2002 and has since had three children while living in the United States. Why would she risk deportation?

A spokesperson for Immigration and Customs Enforcement (ICE) told ABC11 Friday that Rodriguez likely won't be deported. With limited resources, the agency focuses on finding and deporting dangerous criminals.

Supporters of the new law are reluctant to weigh in on whether Rodriguez should be sent back to her home country (Mexico), but NC GOP spokesman Ricky Diaz said what Rodriguez and the others did outside the Governor's mansion isn't the way to be heard.

"Every person who watched that scene yesterday should be asking themselves, 'Is that helpful to promoting public safety and advancing a serious discussion on a very serious issue?' I think most people would say no."

Still, to the person, the six protesters who were arrested yesterday told us it was worth it.

All six are due in court December 3.