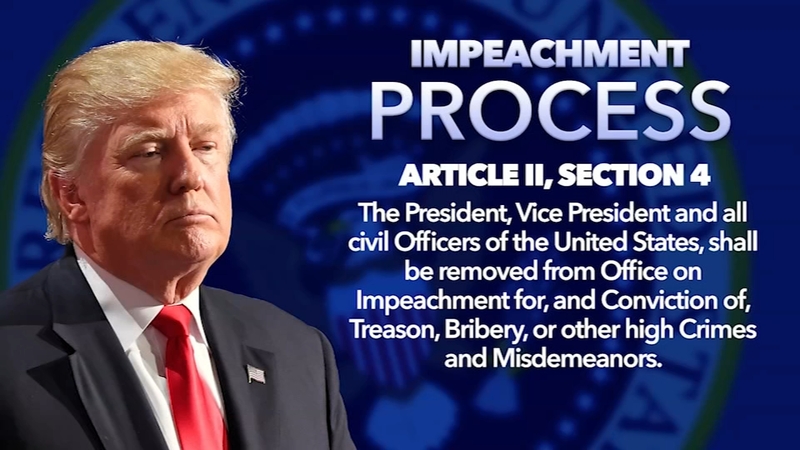 CHAPEL HILL, N.C. (WTVD) -- One of the nation's leading constitutional scholars is warning all lawmakers to slow down their rush to judgment, and instead conduct a "meticulous" investigation of President Trump's conduct that may or may not lead to an impeachment.

Michael J. Gerhardt, the Samual Ashe Distinguished Professor of Constitutional Law at the University of North Carolina's School of Law, tells ABC11 the Founding Fathers were explicit in how they envisioned the concept of impeachment.

"It's a political process that's authorized by the constitution," Gerhardt asserts to ABC11. "The more it seems rushed, the less credibility. It should be a meticulous and slow process because impeachment, if done right and reaching a conclusion of convicting and removing someone from office, it has a final outcome that can't be undone any other way."

Gerhardt's distinguished resume also includes being the only joint witness in the 1998 impeachment hearings of President Bill Clinton. He's written dozens of books on the subject, including The Federal Impeachment Process, which was released earlier this year.

ABC11 spoke exclusively with Gerhardt as President Donald Trump faces intense and increasing scrutiny for allegedly seeking help from foreign governments, including Ukraine and China, to investigate former Vice President Joe Biden, who could be the Democratic candidate for President in 2020.

Article I, Section 2 of the U.S. Constitution gives the House of Representatives the "sole Power of Impeachment," a process Gerhardt defines as the process to "expose and remedy political crimes that are serious breaches of duty or injuries to the Republic."

Impeachment in itself is not a conviction; instead, it's a formal accusation against federal officers, including the President.

According to the National Constitution Center, impeachment can be divided into three phases: first, the House leaders initiate the impeachment process; second, the House Judiciary Committee conducts an investigation, which includes hearings and the markup of articles of impeachment; and third, the full House of Representatives consider the Articles of Impeachment, through which a majority vote constitutes the official charges and allegations.

Article I, Section 3 of the Constitution gives power to the Senate to try an official facing impeachment charges that were passed by the House.

Essentially, the Senate is the judge and jury (unless it's the President, wherein the Chief Justice of the Supreme Court assumes the role of judge). To remove the official from office requires two-thirds majority, or at least 67 senators.

"Even with its 'sole' power to impeach, the House may only initiate a legislative action but must depend on the Senate to complete the job," Gerhardt explains, "whether it entails enacting a law or convicting and removing a high-ranking official, such as the President, for serious misconduct in office."

"Conviction of Treason, Bribery, or other high Crimes and Misdemeanors"

Though the Constitution spells out how an impeachment works in Article I (the Legislative Branch), the framers interestingly did not elaborate on what could be an impeachable offense until Article II, the Executive Branch.

"If you go back to look at the Constitutional Convention, and the debate over the impeachment clause, the things that are mentioned are not technically criminal offenses," Gerhardt says. "If the president uses the pardon power to protect someone with whom he's in criminal concert. That's not against the law, but it's certainly an impeachable offense. We've got to look at the context and look how serious the abuse of power is.

According to Gerhardt, the framers also foreshadowed the potential for impeachment as a political tool, which is why the House also has the power not to impeach.

"This involves political and constitutional considerations," Gerhardt adds. "It includes the gravity of the offense charged, the harm to the constitutional order and the link between an official's conduct and duty."

To date, the U.S. House of Representatives has impeached 19 officials since 1789, including two presidents that were both ultimately acquitted: Andrew Johnson (1868) and Bill Clinton (1998). President Richard Nixon resigned in 1972 in the midst of an impeachment inquiry - and before the House official voted on any articles of Impeachment.

Though Johnson was almost removed by office (just one vote short in the Senate), Gerhardt says the Nixon and Clinton controversies offer more pertinent lessons in understanding what's at stake for President Trump.

"The Clinton episode offers a cautionary tale," Gerhardt explains, noting that the Republican-led House relied on a report from independent counsel Kenneth Starr instead of conducting its own fact-finding mission into whether Clinton lied under oath about his relationship with Monica Lewinsky. "They took (the Starr Report) as gospel. That made it easier for Clinton and his defenders to attack the impeachment as both a rush to judgment and not being properly grounded in misconduct involving the president's abuse of official powers."

Nixon's impeachment proceedings, on the contrary, were "breathtaking," according to Gerhardt.

"For Nixon, the process that led to his resignation took more than two years. The House Judiciary Committee and a Senate select committee undertook meticulous fact-finding, which ultimately uncovered the evidence that Nixon had taped every conversation in the White House."

For Trump, Gerhardt says, the current reality is somewhere in between because of the emergency of transcripts, the whistleblower complaint and other recorded communications.