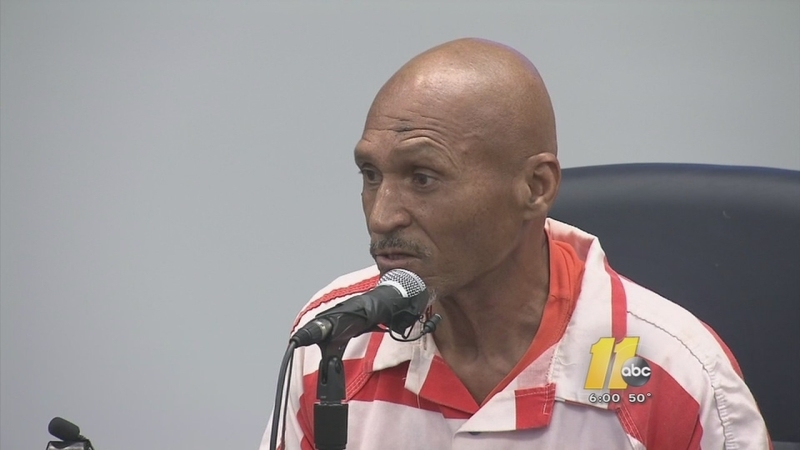 RALEIGH (WTVD) -- The Innocence Inquiry Commission ruled unanimously Friday, a panel of judges needs to review a nearly 40-year-old double murder case that has left a man who claims he's innocent in prison for most of his life.

Joseph Sledge, 70, testified in front of the eight commissioners Friday morning before they went into a two-hour-long deliberation session. His testimony came on the third and final day of the hearing inside the N.C. Judicial Center in Raleigh.

After deliberating, the commission announced their unanimous decision. Judge Quentin Sumner reading the verdict, "There is enough evidence of factual innocence to send double murder case before a three-judge panel for further review."

Sledge, currently serving a life sentence for the murders of Josephine and Ailene Davis in their eastern North Carolina home back in 1976, has never claimed to be a saint. He had escaped from White Lake Prison in Elizabethtown the same night the mother and daughter were stabbed to death.

On Friday, he told the commission that God knows the truth.

Sledge claims he escaped prison to avoid a confrontation with another inmate. While on the run, a friend of his in Fayetteville let him know the authorities were after him.

"'They want you to turn yourself in to be questioned about a murder that occurred in Bladen County,'" Sledge recounted. "I said, 'Oh my goodness! What happened?'"

Sledge said Bladen County detectives were desperate to pin the murders on him. A year after the killings, he said one deputy told him he was meant to take the fall.

"He told me to keep it under my hat -- don't tell nobody this. 'I'm telling you personally,' he said 'They trying to put this case on you man.'"

Sledge never told anyone about that conversation saying he trusted the justice system would work.

"When I see that they set me up and paid these inmates and all that and everything, I knew I didn't have a chance then," said Sledge.

Jailhouse informant Herman Baker, who testified in Sledge's 1978 trial that Sledge admitted to the killings, explained to commissioners this week that it was all a lie he told to ensure his early release and cash reward of $3,000.

"I wish I had never did it," Baker told commissioners.

"Because it was wrong," he said.

Investigators presented physical evidence, thought to be missing for years, but recently uncovered in storage lockers at the Bladen County Sheriff's Office. Independent DNA and forensics experts who tested the evidence collected from the crime scene, testified that none of it points back to Sledge.

"Not only does all of the physical evidence fail to link Mr. Sledge to crime scene, but there was also apparently physical evidence which was introduced at this trial that has been completely undermined in the face of new scientific testing," said Bladen County District Attorney Jon David, following the commission's verdict.

All of this testimony led up to Sledge taking the stand where he got to tell his side of the story.

"Did you kill Josephine and Ailene Davis," questioned Montgomery-Blinn.

"No I did not," answered Sledge without hesitation.

"I don't think I could ever be happy about this case," Chris Mumma, Sledge's attorney told ABC11 following the verdict. "It will remain an incredibly sad and disturbing history for a case."

When commissioners asked what he would do if set free, Sledge answered by saying he would head to Georgia.

"I got a bunch of people I never met before," he said. "I got grandnieces."

Mumma said Sledge's grandmother, who always believed in his innocence, left him a piece of property in Georgia for the day he might be set free.

The victims' family members were also present for the three-day hearing, listening to testimony and evidence that slowly chipped away at the case against Sledge.

David said he talked with them immediately following the verdict.

"Like me, they're committed to making sure that justice is achieved," he said. "They're a little confused by the process and they're unsure about what the road ahead looks like."

The N.C. Supreme Court Chief Justice will appoint a three-judge panel to review this case in Columbus County. They will then decide whether to exonerate Sledge.

It is a process Montgomery-Blinn said could take several months while the judges pour over discovery files.