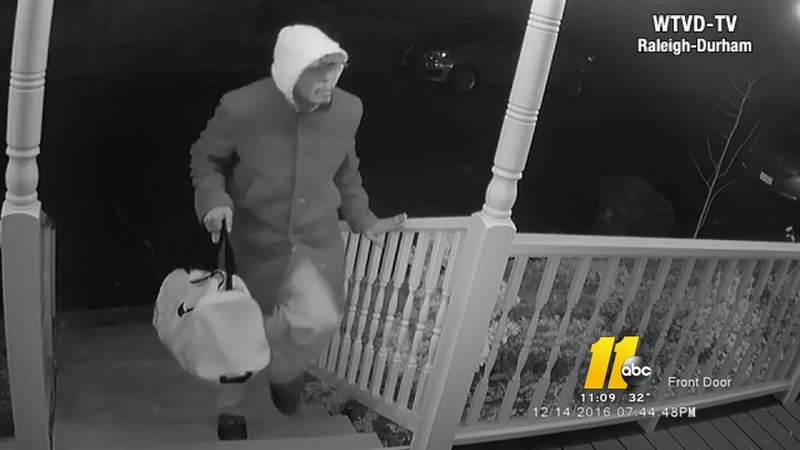 Her son, 5-year-old Greyson Corwin has Type 1 diabetes and relies on his insulin pump to get through the day. The security camera on the family's porch caught the thief in the act.

CAUGHT ON TAPE: This 5-year-old Durham boy's insulin pump was stolen off his front porch Wednesday. And it was caught on camera! #ABC11 pic.twitter.com/PlUsZDiw0x

When the family moved to Durham from Holly Springs last August, an unwelcomed visitor trespassed on their property, prompting Corwin to purchase a security and alarm system.

He said the purchase was a great investment because neighbors have seen the footage and recognize the thief from the neighborhood.

"And the best case scenario would be if he has a whole gigantic closet full of everyone's stuff in the neighborhood," Corwin said. To make matters more uncomfortable, the suspect stole the items while Godly and the children, including 3-year-old Maya, were home.

Godly is especially relieved the incident was not worse, as those with Type 1 are dependent on these supplies.

"We work hard for our son and I knew we were going to be able to replace it," said Godly. "If it was insulin that was delivered and he stole it, we would have had to scramble and get to an all-night pharmacy and get insulin really fast."

Corwin believes the thief may be drug-dependent. He thinks the thief on the security footage stole the pump out of desperation and once he discovered what it was, that would prompt him to change his behavior.

"Hopefully he realizes it's an insulin pump," Corwin said.

Greyson is still grasping to fully understand the nature of the theft and has not seen the security footage. However, he realizes the insulin pump is something he needs to survive. He also understands that if insulin was stolen, it would have been a life-or-death situation.

"That means I would have to get shots," Greyson said.

The Corwin family has since released the surveillance footage to the Durham Police Department and they are hopeful investigators will aggressively pursue an arrest because of age of the victim and dependency of the item stolen.

Instead of donations, the family asks those wanting to help to support and donate to the Triangle/Eastern North Carolina Chapter of the Juvenile Diabetes Research Foundation. You can do so here.

It's the season for package thieves to step up their efforts, and you can take steps to thwart them.