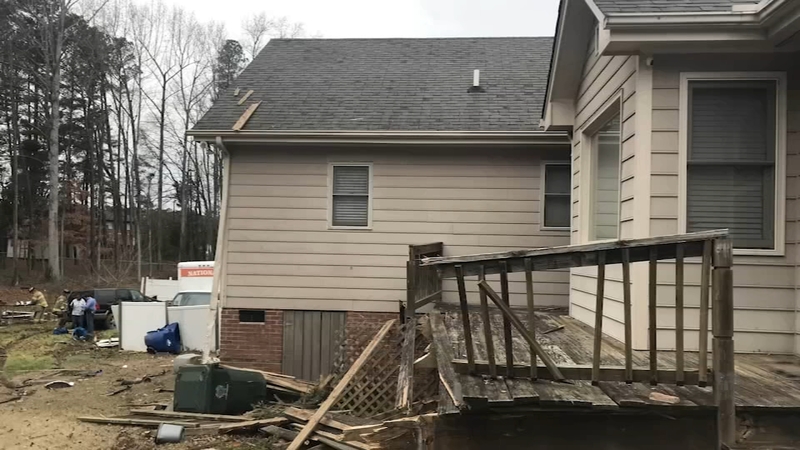 RALEIGH, N.C. (WTVD) -- A fight with an insurance company left a Raleigh couple with damages to their home for more than a year and a half.

It all started back in December 2017 when a driver crashed their car into the Sanders' home.

"I saw this vehicle crossing through the front yard of my neighbors, crossed here between my house; hit the deck, the deck exploded; hit the corner of the house, it tore everything up. That was in the rear of the house here, and then it ended up landing in my neighbor's backyard," Robert Sanders said.

The car crashed right through the Sanders back deck and also caused damage to the brick on their home and throughout their yard.

Sanders said the insurance company of the driver who hit his home, National General Insurance Company agreed to take care of the damages; the Sanders just needed to get estimates.

One estimate they got to fix the damage was for $19,175; the other estimate was for $24,904. However, National General Insurance Company didn't come close to covering either of those estimates.

The paperwork the Sanders shared with ABC11 Troubleshooter Diane Wilson shows the insurance company first offered $9,367, then $10,692, and then bumped their offer up to $12,500.

"They still aren't giving us what we are asking for, or what we have been quoted for so, it is still lowballing, that's what I call it lowballing," Sanders said.

The most frustrating part for the Sanders is without the money, they can't put their home back together.

"They have been dragging their feet for a year and a half now, trying to negotiate with them, trying to get them to cooperate with us, so we can get everything put back. So we reached out to you; hopefully, that will make a big difference, because right now, we have gotten nowhere really with them," Sanders said.

Troubleshooter Diane Wilson reached out to National General Insurance Company and a representative reached out to the Sanders offering more money to settle the claim.

It took some time, but the insurance company offered the Sanders more than $21,000 to settle the claim, and they accepted.

Sanders said he is happy his family can finally start the repairs on their home after waiting more than a year and a half.

"We just want our home fixed the way it is supposed to be fixed."

National General Insurance Company did not add any comment, just worked directly with the Sanders.

The Troubleshooter Takeaways are when dealing with insurance companies try and get everything in writing. Each and every offer you get from them, have documentation. If your losses are more than they are offering, get estimates to show why you need more money. Also, before you start any repairs on your own, make sure you have video and pictures of the damages
Report a correction or typo
Related topics:
personal financeabc11 troubleshooterinsurancetroubleshooter
Copyright © 2022 WTVD-TV. All Rights Reserved.
ABC11 TROUBLESHOOTER
Troubleshooter helps Cary woman get relief over return policy
$1.3M Raleigh home listed on Zillow for $17,000 in latest scam
Report finds people of color pay more in rental application fees
Mail delays blamed on dog, owner claims case of mistaken identity
TOP STORIES
Chytil scores 2, Rangers beat Hurricanes 5-2 to force Game 7
Flight cancellations kick off Memorial Day weekend
NC Lt. Governor speaks at NRA Convention following mass shooting
VP Harris tells Buffalo mourners: Stand up for what's right
Lee County Woman shot and killed, police investigating
Durham mother who founded anti-gun violence group loses second son
Woman gets 15 months in prison for punching flight attendant
Show More
Larry Stogner's honored with a landscaped garden in Durham
Troubleshooter helps Cary woman get relief over return policy
I-40 west reopens in Johnston County after 6 car crash
Police inaction moves to center of Uvalde shooting probe
Victim found dead with gunshot wound in Durham crash identified
More TOP STORIES News