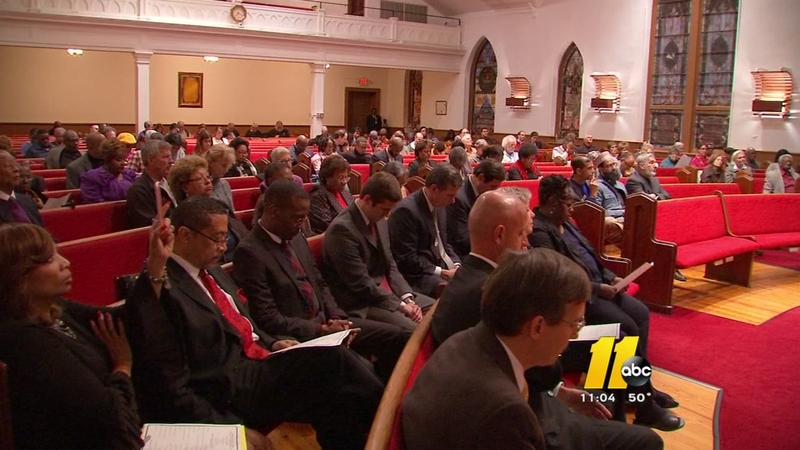 Interfaith service held for those dejected by election results

RALEIGH (WTVD) -- On the sixth day since a surprising election result that capped off a historically divisive presidential campaign, faith leaders packed the pulpit at downtown Raleigh's First Baptist Church and urged the crowd - which was decidedly progressive - to keep praying and working even if the votes of the nation didn't go the way they were hoping.

"The voice of the people is the voice of god, small g," said Rev. Mark-Anthony Middleton of Durham's Abundant Hope Christian Church. "But the big G we represent tonight, calls us to some higher things beyond election results."

The event was dubbed an Interfaith Prayer Service of Healing for a Fractured Country. There were prayers, parables and song -- with some not-so-thinly-veiled references to the new president elect.

Roy Cooper at tonight's prayer service for post-election healing. His own race for governor still up in the air. Told us "he's confident". pic.twitter.com/vzz3J89dNU

"When the leader of the free world grabs a woman without consent. And, the women who voted for him perceive no ill intent. It's time, to get to work," Lexie Hallman sang in musical selection. Hallman is the music director at Temple Beth Or.

Dr. Dumas Harshaw is the pastor at First Baptist. He says his members are overwhelmed with post-election anxieties over what a Donald Trump administration will mean.

"About medication, healthcare, about separation and segregation, about building a wall, the harm to people and families and the breakup of families. There's just a lot of people with a fear I've never seen before," Harshaw said.

Right now in Raleigh: Post-election prayer service.
"The volatility of this election has threatened the fabric of American democracy." pic.twitter.com/Dd9diYYyVr

Praying alongside community members was North Carolina Attorney General Roy Cooper. His own race for governor is still mired in provisional ballot counting and court challenges.

"I think the whole election process was traumatic for everyone," Cooper told ABC11 when asked what he was praying for, tonight. "As people of faith, I thought it was important to come and be part of this."

Cooper said he feels confident the final results will bear him out to be the winner.

He was also asked about NC GOP charges of 'malfeasance' at the Durham County Board of Elections. Cooper declined to comment, saying he'll let the lawyers handle that.