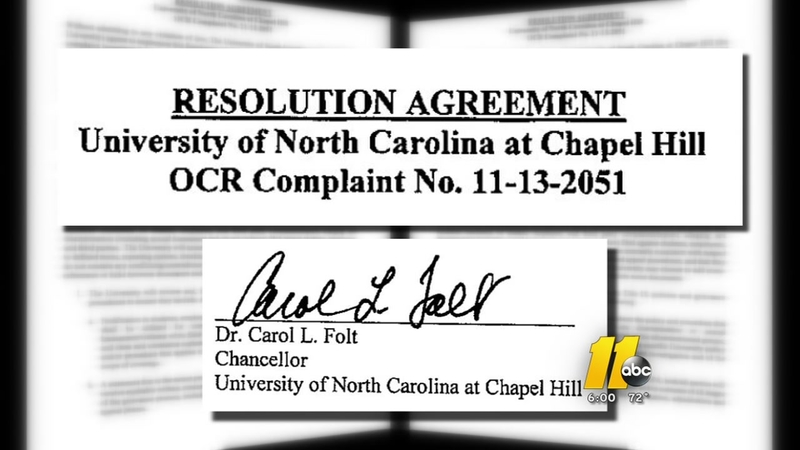 CHAPEL HILL, N.C. (WTVD) -- The University of North Carolina at Chapel Hill violated federal law in its handling of sexual harassment and sexual violence complaints, the Office for Civil Rights of the Department of Education found.

The United States Department of Education notified on Monday four former students and a former administrator who had filed a federal complaint more than five years ago, alleging UNC had failed to maintain compliant policies and grievance procedures that provided for the prompt and equitable resolution of sexual harassment and sexual violence complaints, and that the University failed to equitably respond to complaints of sexual harassment and sexual violence.

The Office for Civil Rights (OCR) determined that UNC did, in fact, fail "to adopt and publish grievance procedures that provide for the prompt and equitable resolution of student, employee, and third-party complaints alleging discrimination on the basis of sex, as required by Title IX."

"When we first came forward, this was a very radical thing," Andrea Pino, who filed a federal complaint in 2013 after she says she was sexually assaulted, told ABC11 on Tuesday. " I was 20 years old taking on a 200-year university and today I can say that I won."

She added: "It's so important to continue pushing other survivor stories out there...to continue holding our institutions accountable because the future Tar Heels deserve that campus that was advertised to us in brochures."

Throughout the five and a half year investigation, OCR reviewed more than 387 individual files of complaints of sexual harassment and sexual violence at UNC that were filed between 2011 and 2016.
The investigation found "inequities in the University's hearing process, instances in which the University was not prompt in accordance with best practices and federal guidelines, and that University faculty and staff, including student staff, were not adequately trained."

UNC issued a statement Tuesday that read, in part:

We thank our students and countless others across the nation for their advocacy, the 22 members of our sexual assault task force, which was convened in 2013, and others who gave input to our comprehensively revised policy and procedures. Their work benefits our community today. We also thank our teams who have worked cooperatively with the OCR during every step of its investigation and the dedicated highly professional people who work on this every day.
Nothing is more important to us than creating a culture at Carolina where every member of our campus community feels safe, supported and respected. While this concludes the OCR investigation, it does not conclude our commitment.