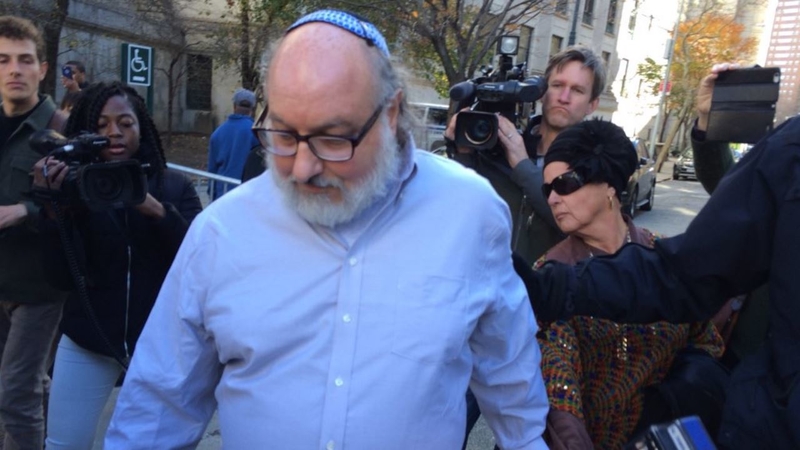 BUTNER, N.C. (WTVD) -- After 30 years behind bars for spying for Israel, Jonathan Pollard is a free man.

The 61-year-old was whisked away from the federal prison in Butner, North Carolina, before dawn Friday in heavy fog and drove straight to New York where he checked in with a parole office.

Video later showed Pollard walking into a federal courthouse in Manhattan on Friday morning with his wife, Esther, to check in at a probation office.

His attorneys have begun a court challenge to terms of his parole they're calling "onerous and oppressive."

Those terms include wearing a GPS ankle bracelet, having limited access to the internet, and being required to stay in the United States for the next 5 years.

Pollard has already announced his desire to renounce his U.S. citizenship and relocate permanently to Israel.

It was his ties to Israel that got the former Naval Intelligence Analyst in trouble in the first place.

In 1985, he was arrested and later convicted of giving thousands of classified documents to Israel. Still, because that country was a U.S. ally, many of Pollard's supporters claimed the punishment, a life sentence, didn't fit the crime.

"He did a crime and he deserved to serve some time, but he was really made an example of, and served way more time for doing a crime that really didn't hurt anybody.

He was helping allies in a way that would not hurt the United States," maintains supporter Laya Saul.

She and her husband, Yaron Jackson, were parked outside of the Federal Prison in Butner, hoping for a glimpse of Pollard upon his release.

The couple, originally from the U.S., moved to Israel in 2004, but were back in the states visiting when they learned that Friday was to be the day Pollard was paroled.

"We have been traveling in America for the last month and we were headed through this general area at this general time. We heard about Jonathan Pollard being released so we altered our schedule and slowed it down and changed it so we would be here," Jackson said.

However, like members of the media waiting outside, Jackson and Saul were denied seeing Pollard's release. He was quietly released from the facility earlier than expected during the dark of night.

From there, he was whisked off to New York where he plans to live and work if his challenge is denied and he must serve out the terms of his parole. Still, it's a victory for those who've been lobbying and praying for him.

And while they didn't get to see him, they did get to see the day he was freed.

Israeli Prime Minister Benjamin Netanyahu released this statement, "The people of Israel welcome the release of Jonathan Pollard. After three long and hard decades Jonathan is finally reunited with his family. I wish this Sabbath will give Jonathan happiness and peace that will continue for life."