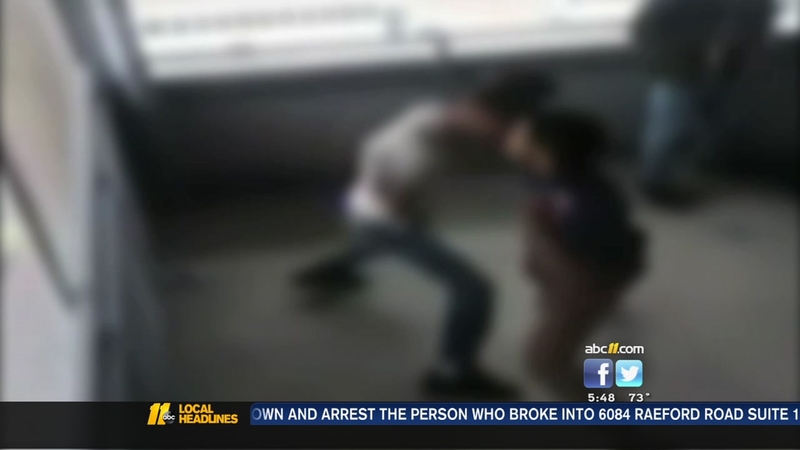 RALEIGH (WTVD) -- With so many kids carrying phones to school these days and social media just a click away, educators and students alike find themselves navigating a new landscape in schools across the country. Many parents say mobile phones open up a Pandora's Box of new problems and worry school leaders often don't seem up to the task.

On myriad occasions over the past school year, student fights have popped up online; often, not out of malice but so the kids fighting could post the video on YouTube and other social media sharing sites.

Parents - is your child featured in an unwanted post on social media? Click here to find out what to do next.

Earlier this week, controversy erupted at Apex Friendship High School when a student posted a racial slur on the social media site Snapchat.

Wednesday, a local chapter of the NAACP had a closed-door meeting with the Wake County School Superintendent to talk about race and racial problems in the school system.

Another example of school troubles spilling out on social media landed a school resource officer at Rolesville High in hot water. This video showed what many said looked like the SRO throwing a high school girl to the ground.

The officer was suspended and later resigned. Read more about the incident here.

Not everyone sees phones in school as a problem. Yolanda Speed says her son, a sophomore at Wake Forest High School who'd been subjected to racist slights, pushed his antagonist to the ground after being threatened. The incident was caught on camera.

"It was on social media and it spread like wildfire," Speed said. "If that video had not have come forward, my son, it would have been a totally different situation."

For better or worse, most agree phones in schools have changed the game when it comes to education. Parents told the I-Team they worry school rules aren't keeping up.

"The school board really needs to step it up," said Rolesville parent Sherry Bauer. She recently pulled her 16-year-old daughter out of Rolesville High after a short stint at the school; not because of the quality of education, she said, but because of bullying on social media.

"When she came last year, I was surprised about the whole phone policy and she was, within the first two months, being bullied by a group of girls," Bauer explained. "Her and another girl were being bullied. They were having videos taken of them in classes, you know, being called names."

Bauer said the videos were then shared on Snapchat and Instagram.

For Bauer, the common thread is clear.

"It's the phones," she said. "I don't think they should have the phones at school. I know it's hard to say that nowadays because everyone has their phone everywhere they go. Kids stay after school, they need to be able to contact their parents. I just don't think they should be out. If you don't have the phones, you're eliminating a large amount of these problems. You'd still have the fighting but there may not be fighting to the same extent because there's nobody watching. They can't post it on Facebook or do whatever."

But where, for Bauer, enforcing a strict "no phones out" policy seems like common sense, school officials disagree.

"I don't think a blanket policy makes the most sense here," said Marlo Gaddis, who heads up Instructional Technology for the Wake County Public School System.

During an interview at the school system headquarters in Cary, Gaddis explained the school system's broad policy that phones should be away unless used for instruction. About a 100 schools are part of a "Bring Your Own Device" program that allows students to bring their phones to school.

"The policy is that the teacher and principal have leeway," Gaddis said, adding that the school system encourages teachers to help students understand how to use their phones and social media responsibly. "Making sure that we're educating our kids on how to use that is an important piece for us. It's kind of like Drivers Ed."

Unlike Drivers Ed, there are no classes to help kids - or teachers, for that matter - learn about social media in Wake County schools. Gaddis said teachers are expected to fold it into their lessons.

"Social media is integrated into our world, so it's not a separate class," explained Gaddis.

But Mitch Prinstein, a psychologist at UNC who specializes in young people's engagement with social media, said it's time for school districts to consider updating their curriculum.

"This needs to be part of education for parenting, for administrators, and for kids themselves," said Prinstein. "This is one that's kind of gone over our heads as adults and it's time for us to catch up."

Prinstein said school boards, educators, staff, and parents all need to be better informed about how kids are using their phones and social media - especially those setting policy. He suggested setting regular workshops on social media for teachers and staff, classes on the subject for students, and an advisory panel for school boards made up of students to help inform policy makers about what's really happening in schools.

"It's almost impossible for us as adults to keep up with all that's happening but it's very important that we do so or we're missing a huge source of potential damage," Prinstein mused.

In October 2016, the WCPSS Board approved a new Internet Safety policy, outlining how the district encourages "appropriate usage of technology."

School system spokesperson Lisa Luten said students are also expected to comply with the student code of conduct, which prohibits bullying, in any form, including on social media.

Luten also pointed out the school district also follows safety and ethical use guidelines set forward by the NC Department of Public Instruction and encourages teachers to refer to the Scope & Sequence: Common Sense K-12 Digital Citizenship Curriculum to develop lessons and activities.

Prinstein says all of that may not be enough given the magnitude of the changes in schools today.

"At this point, because we haven't spent enough time with social media, we're all playing catch-up to try and learn what it is that kids know and how best we can help them," Prinstein explained. "Kids are spending a remarkable number of hours a day on social media and we've all kind of turned a blind eye to it so far. I think it's time for us to understand that we're understanding social media, monitoring it and teaching kids how to use it."

Note: The I-Team made a number of efforts to connect with School Board Chair Monika Johnson. She deferred to Marlo Gaddis' understanding of school policy. Gaddis, however, doesn't set school policy, she directs it. Another school board member told ABC11 that they've been unusually focused on the school system's budget in the last few weeks. Folks following the House Bill 13 saga will understand why. With that in the rearview mirror, we're told the issue of fights in schools spilling out over social media will get more attention. The I-Team reached out to all school board members to see if any had their own ideas about social media and phone-in-school policies. So far, we haven't heard back.

This is the email Jon Camp sent to WCPSS officials