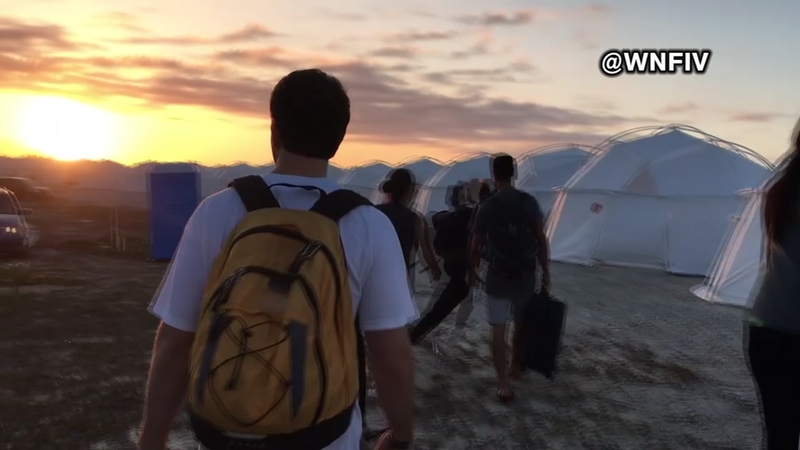 RALEIGH, N.C. (WTVD) -- The Fyre Festival was the greatest party that never happened. Some people say it was doomed from the start and now, the event is the subject of two dueling documentaries.

Netflix and Hulu each have films diving deep into the festival's grand failure.

A Raleigh resident attended the disastrous event. His tweets and videos went viral.

Much of his cell-phone video showed the chaos and conditions that were used in the documentaries.

He said there were no major "red flags" leading up to the getaway, but the reality was that he shelled out about $5,000 to be left in survival mode.

"It was not a safe situation," he said.

Rapper Ja Rule and entrepreneur Billy McFarland were the driving force behind the posh endeavor.

The event was billed as the next best music festival on a beautiful private Bahamian island. The festival was sold out and luxury was promised.

What attendees got after spending thousands of dollars were FEMA tents tightly packed on a sandlot and mattresses tossed inside. Luggage was hurled out of shipping containers, and there was no security nor signs of a medical station.

"I think it was extremely reckless. I think he (Billy) put a lot of people in danger by doing that," said Crossno. "The Bahamian government stopped flights from coming into the country."

Crossno shot cell video when the McFarland stood on a table and told folks to just go sleep whenever.

People had been waiting in line for hours to check in.

Crossno never got a tent. "It became everybody for themselves," he said.

Airports were overwhelmed with people trying to leave.

On Crossno's journey back to North Carolina, he said he was locked inside an airport with no food or water.

The Netflix documentary shows the weeks and days up leading up to the Caribbean chaos, and organizers warned McFarland that an event of this size could not be pulled off.

Several lawsuits have been filed, including one in Wake County.

"Once the sun went down, it turned into "Lord of the Flies." Pandemonium, lawlessness. it was not a safe place to be," said Crossno's attorney Stacy Miller.

Crossno sued McFarland for fraud and won a $5 million judgment.

"Pure greed ... that's what this case is about. Billy's a con man," Miller said.

As bad as the attendees had it, Crossno said it's the people who worked on the island, and who went without pay, who really had the worst trip of their lives.

"It goes a lot further than a bunch of kids on Instagram got duped into going down to an island," said Crossno. "They (Bahamian workers) obviously had it a lot worse. We had a bad experience."

McFarland was convicted of fraud and sentenced to six years in prison.

Crossno plans to start a podcast called "Dumpster Fyre" where he will further detail his experience of the fiasco.

In the meantime, money continues to pour in for the Bahamians who were deserted. Two GoFundMe pages have been set up.