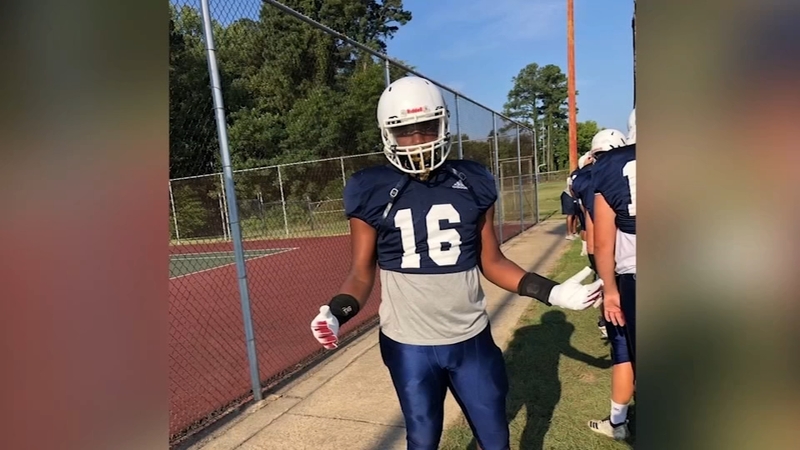 A 16-year-old high school student is now at UNC Hospital recovering in a wheelchair and working towards walking again.

Jaylin Sumpter is starting to get the feeling back on the right side of his body. It has been a little more than a week since the seemingly healthy student-athlete suffered a stroke.

RELATED: Stroke: How to spot the warning signs, symptoms

The football player suffered the stroke last Monday. It didn't happen while he was out on the field or lifting weights, but while sitting in front of a television playing video games.

"I was trying to make a play, but my hand wouldn't move," he said.

Sumpter didn't understand at first and tried to shake it off.

"When I woke up in the middle of the night (I was) really hurting, had to go to the bathroom and I tried to get up, but then I fell straight down," he said.

He’s 16-years-old, a sophomore in high school, and just suffered a stroke. I met Jaylin Sumpter at #UNCHospital. He is working towards waking again and says he was shocked this happened at his age. #ABC11 pic.twitter.com/zB7YbH6AyP

Sumpter was airlifted from Lee County to UNC.

He said doctors have done a bunch of tests, but they're still not sure what caused the stroke.

Sumpter is getting support as he works towards recovery.

Sumpter is receiving several forms of therapy right now and his speech is getting better.

The teen said he's inching to get out of his wheelchair and return to the field with a new perspective.

"It's taught me a lot -- to take care of your body and don't take things for granted, like being able to walk," said Sumpter.

He is hoping to be released next month before his 17th birthday.