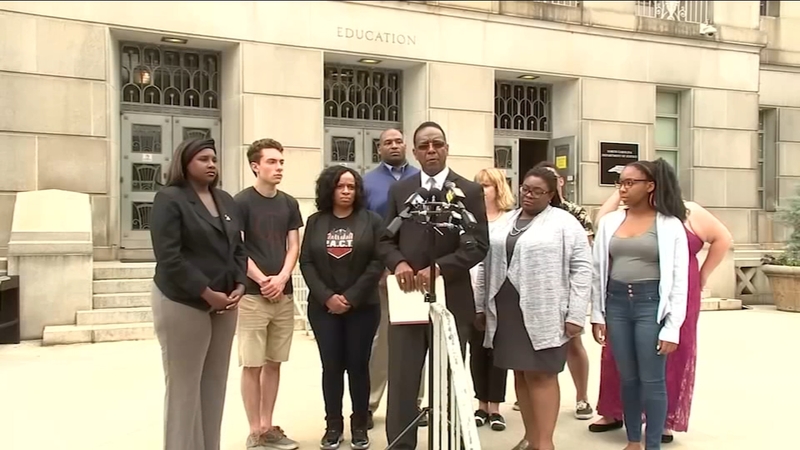 For the first time publicly on Wednesday, Jazmyne Childs came forward, describing how she was allegedly sexually harassed by Gatewood.

On Thursday, NAACP President and CEO Derrick Johnson issued a letter notifying Gatewood that his membership was immediately suspended pending a hearing.

"Reverend Gatewood was directed to immediately cease holding himself out as a member of the Association," the notice said. "Because candidates for State Conference Office must be members in good standing with the organization, he is also ineligible to run for office unless his membership is restored."

Gatewood, a former president of the Durham County and Alamance County NAACP, chapters, and best known for coordinating the Historic Thousands on Jones Street rallies in Raleigh, was Childs' supervisor in 2017, when the alleged sexual misconduct took place.

"It continues to haunt and hurt me," Childs said Wednesday.

On Thursday evening, Gatewood sent a response to ABC11, saying in part, "I do not believe in fighting my people in the media, but now my family's survival may be at stake due to such a grave and unthinkable internal injustice."

He went on to say that the allegations are "totally false" and took aim at the Rev. William Barber, who defended Childs at her Wednesday news conference.

"Rev. Barber seems to have long envied the love the people of NC have had for me," Gatewood wrote. "They have seen me as one of the pioneers of every single success the NAACP won during the Barber Administration. They know, not only was I one of their most dedicated staff members, I was the longest-serving staff member under the Barber administration."

During the investigation, Gatewood resigned. He was also running to be state NAACP president.

After leaving the organization, Childs said she repeatedly asked the national NAACP to create a formal sexual harassment policy and ban Gatewood from membership.

She said her requests were ignored.

"The NAACP takes all allegations of sexual harassment seriously. As an organization vested in uplifting and empowering the most vulnerable, we do not condone such behavior nor do we protect those engaging in such behavior. On September 4 we received a formal complaint from members of the North Carolina State Conference alleging sexual impropriety. The complaint begins an internal disciplinary process; as such, the NAACP will have no further public statements about this matter until the process is complete."
Report a correction or typo
Related topics:
raleighncsexual misconductharassmentsexual harassmentnaacpcivil rights
Copyright © 2022 WTVD-TV. All Rights Reserved.
TOP STORIES
Police looking for Johnston County man in Fayetteville double homicide
Shaw University rolls out plan to redevelop downtown Raleigh campus
Raleigh Fire, Police warn of looming problems without major pay raises
Baby giraffe fitted with orthotic at San Diego Zoo Safari Park
NC Primary Election: What to know before you vote
Baby formula maker Abbott says agreement reached to reopen plant
Cumberland County mom on mission to help other moms with infant needs
Show More
What we know about the victims of the Buffalo shooting
You can now order 3rd round of free at-home COVID-19 tests
NCCU law analyst: 'Replacement theory' driving increased hate crimes
Hamlin, Jordan team wins second NASCAR race
Reward offered for information on endangered red wolf death
More TOP STORIES News