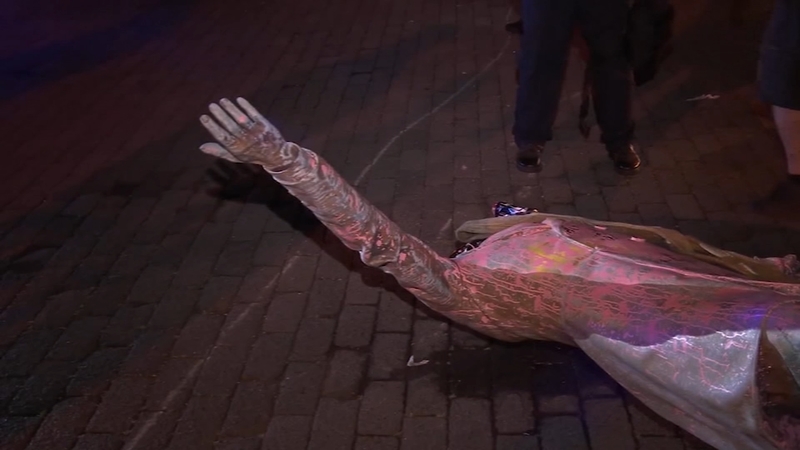 The statue in the former capital of the Confederacy was toppled shortly before 11 p.m., news outlets reported.

Richmond police were on the scene and videos on social media showed the monument being towed away as a crowd cheered.

About 80 miles (130 kilometers) away, protesters in Portsmouth beheaded and then pulled down four statues that were part of a Confederate monument on Wednesday, according to media outlets.

Efforts to tear one of the statues down began around 8:20 p.m., but the rope they were using snapped, The Virginian-Pilot reported.

The crowd was frustrated by the Portsmouth City Council's decision to put off moving the monument.

They switched to throwing bricks from the post that held the plaque they had pulled down as they initially worked to bring down the statue.

The Pilot reports that they then started to dismantle the monument one piece at a time as a marching band played in the streets and other protesters danced.

A protester in his 30s was hit in the head as the monument fell, causing him to lose consciousness, Portsmouth NAACP Vice President Louie Gibbs told the newspaper.

The crowd quieted as the man was taken to a hospital. His condition was not immediately clear.

A flag tied to the monument was lit on fire, and the flames burned briefly at the base of one of the statues.

The actions come amid national protests over the death of George Floyd who died after a police officer kneeled on his neck.

A statue of Christopher Columbus in Richmond was torn down by protesters, set on fire and then submerged into a lake on Tuesday. News outlets reported the Columbus statue was toppled less than two hours after protesters gathered in the city's Byrd Park chanting for the statue to be taken down.

The death of Floyd, who was black, has prompted similar Confederate monument removals around the nation.

Some people say the tributes inappropriately glorify people who led a rebellion that sought to uphold slavery. Others say their removal amounts to erasing history.

Virginia Gov. Ralph Northam last week ordered the removal of an iconic statue of Confederate Gen. Robert E. Lee, which is four blocks away from where the Davis statue stood.

A judge on Monday issued an injunction preventing officials from removing the monuments for the next 10 days.
Report a correction or typo
Related topics:
societyvirginiastatueprotestracismu.s. & worldconfederate monumentconfederacy
Copyright © 2021 by The Associated Press. All Rights Reserved.
More Videos
From CNN Newsource affiliates
TOP STORIES