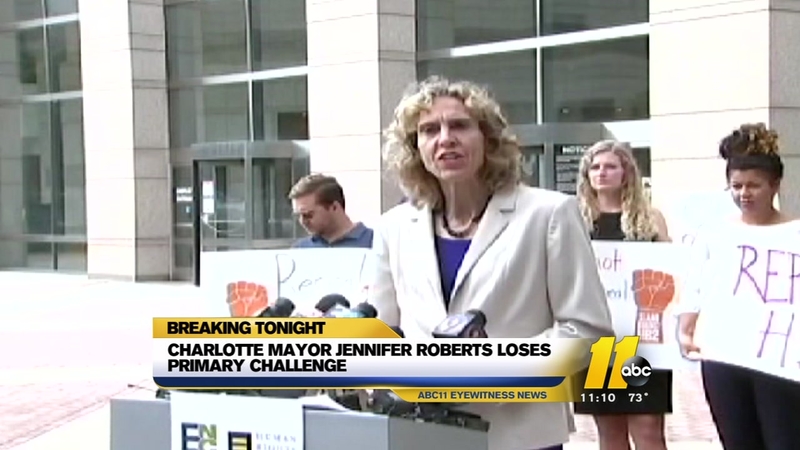 Roberts, the mayor of North Carolina's largest city, was in a quest to win a second term in office.

Lyles, who campaigned on a platform for better jobs, more affordable housing and infrastructure, said no one issue will supersede the other if she wins the office.

"I don't believe any one thing is a focus," Lyles said. "What we need to do is figure out how to knit all of that together and take action in what we have."

Lyles will face Kenny Smith, the runaway winner in the Republican primary who served with Lyles on the Charlotte City Council. Smith had garnered nearly 89 percent of the vote with most precincts reporting.

The polls opened at 6:30 a.m. and closed at 7:30 p.m. Election officials had been concerned about a potential threat from Hurricane Irma, but the storm veered west and its impact on the city was less than initially anticipated.

Although Roberts' two years in office were marked by controversy, including a controversial bathroom-gender bill that spurred North Carolina's General Assembly to create the polarizing House Bill 2 law, she was considered to be the favorite in a low turnout election.

"Tonight's results prove that the people of Charlotte are ready for a new direction. However, as Mayor Pro Tem, Vi Lyles has been at Mayor Robert's side as they worked together to pursue a failed and divisive agenda," NCGOP Chairman Robin Hayes said Tuesday evening. "Their unsuccessful leadership has cost Charlotte countless jobs and opportunities while violent crime continues to rise. Kenny Smith will bring much-needed change to the city with his plan for more jobs, better wages, safer streets, and smarter infrastructure."

Roberts also faced pressure and calls to resign following the police shooting of Keith Lamont Scott and the ensuing riots. The calls were amplified after she and the Charlotte-Mecklenburg police chief initially refused to release police body camera and dashboard camera footage from the shooting.

The general election is scheduled for Nov. 7.