Jetpack sighting: Pilots near LAX warned to be on lookout after 'possible jetpack man' spotted 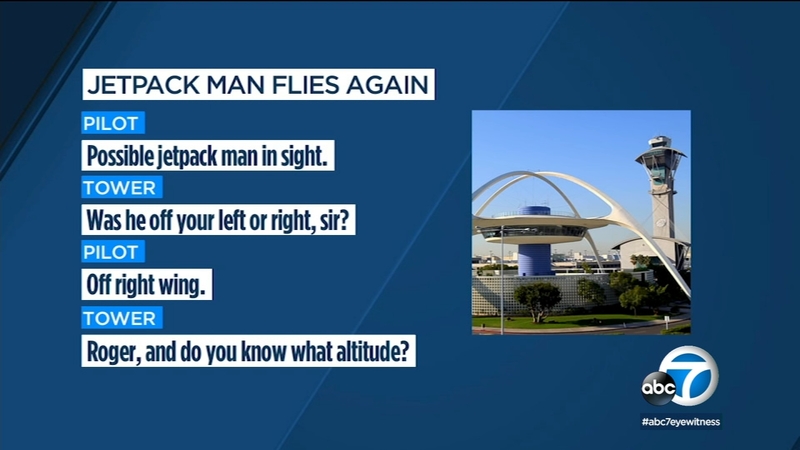 LOS ANGELES -- The real-life Iron Man is back, boggling the minds of pilots, authorities and Californians alike.

Another sighting was reported of a man who appeared to be flying a jetpack thousands of feet above ground near Los Angeles International Airport Wednesday.

"A Boeing 747 pilot reported seeing an object that might have resembled a jetpack 15 miles east of LAX at 5,000 feet altitude," a Federal Aviation Administration spokesperson said. "Out of an abundance of caution, air traffic controllers alerted other pilots in the vicinity."

Another sighting has been reported of a jetpack flying over the Los Angeles area, a recurring mystery reported by pilots that, until now, had not been captured on video.

Last year, an instructor with a flight school captured footage of what appears to be the elusive "jetpack man" flying off the coast of Los Angeles County at an altitude of about 3,000 feet.

In August 2020, two commercial airline pilots reported seeing someone in a jetpack near planes around LAX. Another sighting was reported in October by a crew with China Airlines.

The FBI and FAA have investigated the reported sightings, as jetpacks can represent a hazard to aircraft.

Some investigators believe it could be a drone made to look like a man in a jet pack.