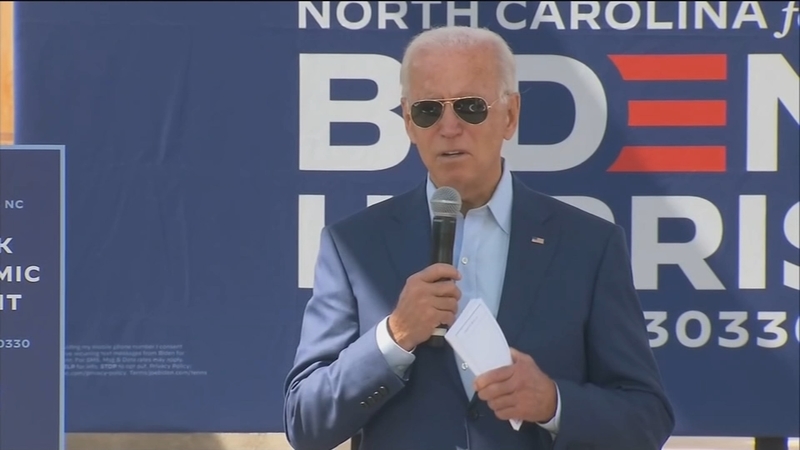 CHARLOTTE, N.C. (WTVD) -- Democratic Presidential nominee Joe Biden made a visit to Charlotte on Wednesday for a Black economic summit.

Biden met and spoke with Black business owners, educators and working people. He highlighted his plan to Build Back Better, which includes investing $70 billion in HBCUs and leveraging $150 billion in new opportunities for Black-owned small businesses.

"The cycle that exists for the African American community by and large finds itself in a lot of economic upheaval," Biden said during his speech. "When things get bad, they're the first ones in the hole, and when things get better, they're the last ones out."

And as the country passes 200,000 deaths due to the novel coronavirus, Biden talked about the need to protect and expand the Affordable Care Act to make sure more Americans have health care coverage.

"You look out there and you have a pandemic, unemployment, race relations drawn into focus, police brutality," Biden said. "People now saying, 'My Lord, I didn't realize it was this bad.'"

President Donald Trump will also be in Charlotte on Thursday as part of his reelection campaign. Trump is expected to talk about his administration's plan to deliver low-cost healthcare. This will be President Trump's 14th official visit to North Carolina.

President Trump won North Carolina during the 2016 election against Hillary Clinton. However, most polls show a very close race between Biden and Trump in 2020.

The Trump campaign has even said it sees North Carolina as a state the president must win in order to be re-elected, which is why Trump and Vice President Mike Pence have made several visits to North Carolina over the past few weeks.