Joe Biden may not be allowed to bring his Peloton bike to White House. Here's why: 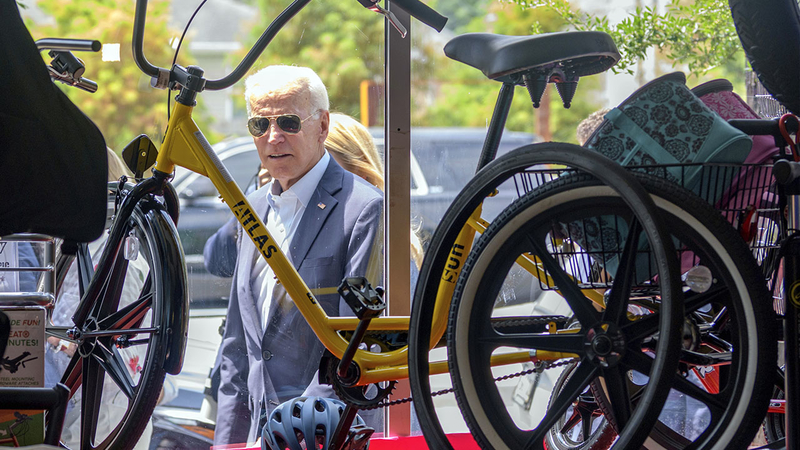 WASHINGTON -- Joe Biden is moving into the White House, but just because he's president of the United States doesn't mean he's allowed to bring whatever he wants.

It is not clear whether the Biden family's moving trucks will be allowed to haul the president's beloved Peloton from his Wilmington, Delaware, home.

The standalone bikes typically have video cameras that connect to the internet, which could be one of few minor hiccups.

Past presidents' high-tech gadgets have typically required security vetting and retrofitting -- especially when they connect to the internet or cell networks. The Washington Post reported in February 2019 that Trump had a $50,000, room-sized golf simulator installed in the White House -- replacing a less sophisticated simulator installed by President Barack Obama. At the time, the price for the fully set-up Trump simulator from TrackMan, which has golf simulators at multiple Trump properties, started at around $50,000.

Joe Biden delivers remarks after he is sworn in as 46th President of the United States.

High-end simulators such as TrackMan's often connect to the internet and have sensors or cameras. Emails from the US Secret Service obtained by CNN through the Freedom of Information Act show that agency personnel, including a protective detail liaison for the Secret Service's Technical Security Division, exchanged "notes" and "tech info" on the TrackMan golf simulator in the months prior to its reported installation.

Previous presidents didn't have such high-tech problems. President George W. Bush asked for workout equipment, including an elliptical machine and dumbbells, to be installed in a poolside cabana steps from the Oval Office, and a fold-up treadmill to be placed aboard Air Force One. Old-school enough not to raise security flags.

ABC News' Cecilia Vega reported that former first lady Michelle Obama was also a fan of the popular stationary bike and had hers outfitted so that it could stay inside 1600 Pennsylvania Avenue.

No word whether Biden's Peloton will get the same scrutiny.

If not, the newly elected president can always resort to jogging.