ABC11's Kaplan: Biden's inauguration might be easiest part of his presidency 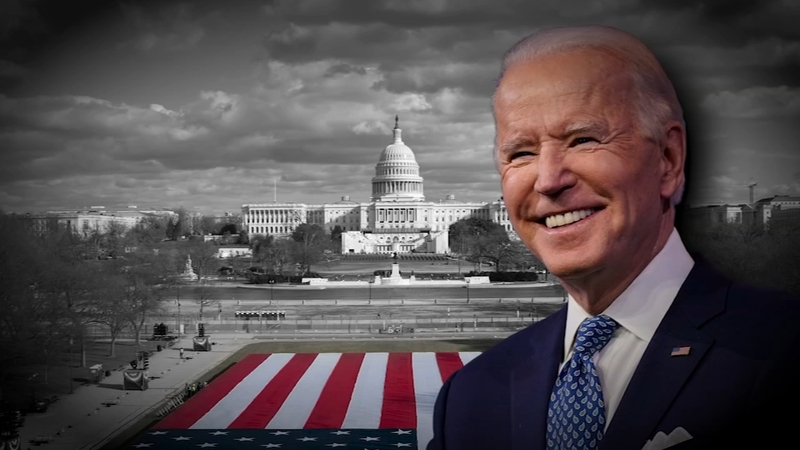 Biden's inauguration might be easiest part of his presidency

His election grievances notwithstanding, President Donald Trump mostly groveled at governing since Election Day, and withdrew from leading efforts to distribute COVID-19 vaccines, improve coordination with states or negotiate an even more extensive relief package to rescue millions of Americans from slipping into poverty.

"I know these are dark times, but there's always light," President-Elect Biden said Tuesday before leaving his home state of Delaware for Washington. "But we have great opportunities."

Chief among those opportunities includes passing Biden's $1.9 trillion COVID relief package he introduced last week. Called the "American Rescue Plan," the legislative proposal would meet Biden's goal of administering 100 million vaccines by the 100th day of his administration and advance his objective of reopening most schools by the spring. On a parallel track, it delivers another round of aid to stabilize the economy while the public health effort seeks the upper hand on the pandemic.

"Nothing else is going to get solved in the economy without the pandemic being under control," Rep. David Price, D-NC, a transition advisor, told ABC11 in an interview Tuesday. "That will be pursued decisively as is the economic recovery. A good portion of this involves housing, rental payments, evictions and we're working hard on that piece of it. And on transportation - transit, Amtrak, airports - the kind of things that need attention."

Though Biden will enjoy majorities in both chambers of Congress -- they are either slim (in the House) or razor-thin (in the Senate). With no room for defections, Biden is hoping to build bipartisan support -- and some North Carolina Republicans seem willing to play ball.

"As long as it's very targeted," Rep. Ted Budd, R-NC, explained to ABC11, referring to a proposed COVID relief package. "There are people who need more help than $2,000 and some people don't need that. We want to make sure it's targeted and good use of taxpayer money. What (Biden) says is he wants us to work together. He wants to grow economy, help small businesses and working class individuals. I want to help them as well. We can work together on those things."

"Certainly with infrastructure, people think of roads and bridges, but it's also water and sewer but in particular broadband deployment," Rouzer added. "We all know that broadband deployment in rural areas, in some places is exceptionally difficult. It's a disadvantage for health care and for students who can't compete with students in urban areas."

As prominent and as protrusive as the COVID Pandemic is, the United States is still left with myriad pre-existing conditions: the Affordable Care Act could be gutted by the Supreme Court; the nation is no closer to meaningful immigration reform legislation than it was 20 years ago; the national debt continues to crater as deep as the Grand Canyon; North Korea and Iran remain belligerent regimes with the former, for now, being armed with nuclear weapons, while the latter, for now, shows no signs of slowing nuclear development; and the United States is still in the early stages of grief after the violent insurrection on Capitol Hill, the unveiling of insidious white supremacist forces among the mob, and the historic second impeachment of his predecessor who still remains popular with tens of millions of Americans.

As Chief Executive, Biden will also be in charge of a federal government operation consisting of more than 9 million employees -- and thousands of open positions he'll have fill.

"What you're going to have for some weeks now, in most departments, is acting secretaries and deputy secretaries," Rep. Price said. "Most will come from the civil service ranks and professionals in the department."

The Biden Transition has announced a series of cabinet nominations, including Anthony Blinken for Secretary of State, Judge Merrick Garland for Attorney General, and North Carolina's own Michael Regan to lead the Environmental Protection Agency. They'll all have to be confirmed by the Senate.

"There's a huge stake in all of these pieces fitting together."

The inauguration might be the centerpiece of that puzzle, with the corners and sides still being defined -- and who knows when everything in between will fill in the blanks.
Report a correction or typo
Related topics:
politicswashington d.c.presidential inaugurationjoe bidenpresident donald trump
Copyright © 2021 WTVD-TV. All Rights Reserved.
TOP STORIES
Mark Meadows to halt cooperation with January 6 committee
Amber Alert issued for 1-year-old Randolph County girl
Everyone should get tested prior to indoor gatherings, CDC says
Toyota to build lithium battery plant in NC
50 mutations in omicron could be its downfall, data shows
Why feds are warning it could take months to get a passport
Show More
Raleigh Police plan to crack down on speeding drivers
This day in history: Pearl Harbor attacked
CEO of American Airlines retiring
Durham, Zebulon make political history with new mayors
NC unemployment improving but businesses still struggle to hire
More TOP STORIES News