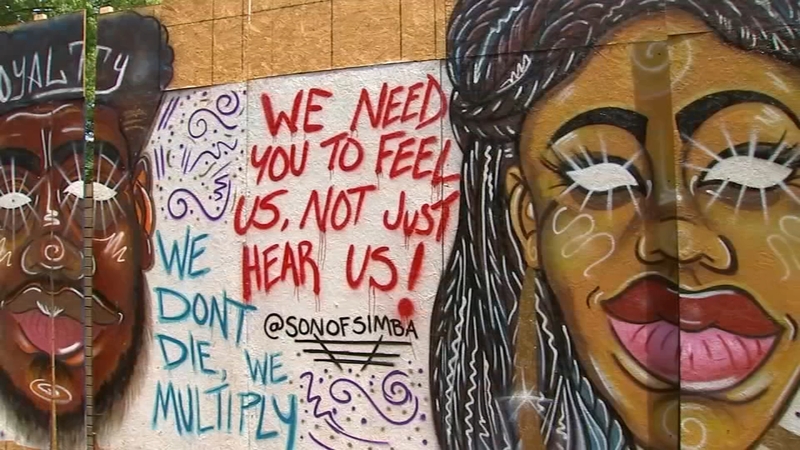 DURHAM (WTVD) -- A book of photos has people in Durham's arts community talking. At issue: Murals, reproduced and published by a man critics say did not consult the artists who created them first.

The art appeared on plywood that covered storefronts on Main Street, shortly after George Floyd died with a Minneapolis police officer's knee on his neck.

"Political art is something that Durham artists have been doing for a long time," said Gemynii, one of the artists whose work appears in the book. "So what you're seeing here is just an amplified movement of that, especially with the social justice movement we've been having in the last few months."

"It was a handmade book that he had taken pictures, and put together himself," said Cam Davis, talking about the book critics say was priced at $75. "That was his price, that he was wanting for it."

"And for someone to come along and kinda like, 'Oh how cool this is, and I'm gonna sell this book with this cool stuff in here," it's a violation. And again, it's a teachable moment," said Angel Dozier of Art Ain't Innocent. "This book emerged from an Instagram post that Cam Davis made from Louella Durham."

"I was given a book by John Davis, no relation. He put it out as a tribute to the artists, to the Black Lives movement," said Cam Davis

"The book was created by John Davis but John didn't have the permission from any of the artists to put any of their work in the book," Dozier said. "This was a community project that doesn't belong to anybody except the artists."

Cam Davis said he's taking a break from social media due to the amount of criticism directed his way online.

"I apologize. I regret every bit of what happened, and I regret being a part of it," said Davis.

"He apologized to me, but he hasn't gone far enough to apologize to the artists," said Cam when asked if he's heard from John Davis.

A statement from John Davis to ABC11 reads:

"My only intention and purpose in creating this work was to pay tribute to, celebrate and preserve in permanent form artwork which had been created in public space and was beginning to disappear as boarded up storefronts began to reopen. The people to whom I have shown, given and sold the book all understood, agreed with and appreciated my effort to save and display this work. I sold three copies of the book for $50 each (out of pocket cost was approximately $25-30, not counting my time and effort) gave one away and have destroyed the remaining copies. If by giving the artists credit you mean recognizing them, I identified each one by name on their page. I regret this experience but have nothing further to say; please contact me if you need/want anything more."

"There's a chance that it might go to court, but it looks like that won't be necessary," said Angel Dozier.

Gemynii has this advice for those who like the murals: "Just make sure that you're paying and supporting Black artists in this community. It's okay to admire the art but make sure that you're giving folks their credit. Most artists have their CashApp or their Venmo. Even if you can't afford to actually buy the work, send an artist $20. Pay for their meal for the day. It really helps!"
Report a correction or typo
Related topics:
societydurhamartbooksgeorge floydmural artsdurham county news
Copyright © 2022 WTVD-TV. All Rights Reserved.
ART
A healing refuge for SF's Tenderloin neighborhood
Mural honors music icon Jenni Rivera
Artsplosure calls for artists for May event in Raleigh
Masterpieces at the cemetery
TOP STORIES
Rabbi calls out antisemitic graffiti on Raleigh bridge
Court papers show how investigators linked suspect in Hedgepeth murder
FDA halts use of antibody drugs that don't work vs. omicron
TX Mom shares story of son's 'scary' battle with COVID complications
COVID-19 vaccines do not affect fertility, study finds
James Webb telescope now in orbit around the Sun
SAT going digital in shifting college admissions atmosphere
Show More
Omicron-specific COVID-19 vaccine starts clinical trials
LATEST: New locations give out N95 masks
8,500 troops placed on heightened alert for European deployment
As last-ditch effort, Cary tapas bar launches fundraiser to stay open
Supreme Court to hear challenge to race in college admissions
More TOP STORIES News